First Wave of Artists and Activities Announced for Second Annual Event including:

of Montreal, Big Head Todd and the Monsters, The Chris Robinson Brotherhood, MUTEMATH, Guided By Voices, Red Wanting Blue, Sebadoh, WHY? and many more 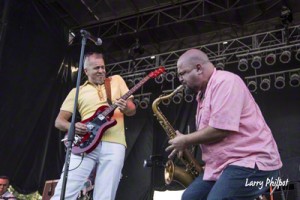 WARMfest promotes environmental responsibility, independent business and artisans, and community wellness through the magic of music, art and recreation. WARMfest has a vision to restore and promote the White River to return it to the grandeur of a century ago. The mission is to educate the community to envision this great river as a recreational and visually appealing natural resource. WARMfest will realize this vision by presenting a four-day cultural experience in Broad Ripple Park.

“We are happy to return for a second year and both further our mission and bring a high quality, high energy community event to Broad Ripple,” said WARMfest founder Dan Ripley. “This year’s event will span four days and feature a kick-off night on Friday, national and regional concerts on Saturday and Sunday, and a community day on Monday.” 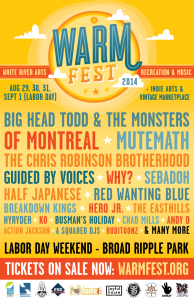 VIP tickets and packages from $150

Children age 10 and under will be admitted free with paid adult.

WARMfest will bring together several key Indianapolis cultural groups including the Indie Arts & Vintage Marketplace, Indy Parks & Recreation, Broad Ripple Music Fest and Joyful Noise Recordings. A portion of the proceeds from the event will benefit the Indianapolis Parks Foundation.