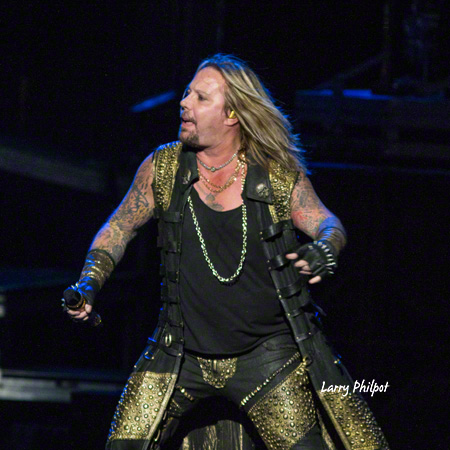 MÖTLEY CRÜE: THE FINAL TOUR “ALL BAD THINGS MUST COME TO AN END”
THURSDAY, AUGUST 20
at BANKERS LIFE FIELDHOUSE IN INDIANAPOLIS

TICKETS: Tickets are on sale now at the Bankers Life Fieldhouse box office, all Ticketmaster outlets,Ticketmaster.com, BankersLifeFieldhouse.com or by calling 800-745-3000.

MÖTLEY CRÜE is The World’s Most Notorious Rock Band. Vince Neil (vocals), Mick Mars (guitar), Nikki Sixx (bass) and Tommy Lee (drums) laid the foundation for their inimitable career in the ’80s with their genre-bending music, a mix of anthemic choruses, stadium-sized riffs, punk rock and melodic power, along with their relentless reputation, typifying an excess never before seen in modern music.

But they didn’t stop there.

MÖTLEY CRÜE continued to evolve through the ’90s and beyond, releasing their NY Times best-selling book The Dirt long before it was common and cool for celebrities to have their own tomes. The page-turning rock epic offered a keyhole view into life in The CRÜE. It is currently being adapted into a feature film by noted director Jeff Tremaine.

MÖTLEY CRÜE reinvented itself yet again through the ’00s and the present decade by continually doing new things, such as launching a branded tour known as Crüefest. Also, The CRÜE was the first band to do a rock residency in Las Vegas, something its peers, Def Leppard and Guns N’ Roses, did after them. Their sold-out stint at the Hard Rock Hotel & Casino further elevated MÖTLEY CRÜE ‘s mythos, demonstrating the fact that they can do anything. They’ve also executed impressive, innovative live production, such as Lee’s roller coaster, which sends him around a 360-degree loop during his drum solo.

Besides the hook-filled, ground-breaking music, MÖTLEY CRÜE’s image pioneered an attitude, fashion sense and lifestyle, influencing a legion of fans who copied its look.

The members of the band have published a total of five New York Times Best-Selling books, including The Heroin Diaries and This Is Gonna Hurt by Nikki Sixx; Tommyland by Tommy Lee; Tattoos and Tequila by Vince Neil and the infamous The Dirt.

This capacity for reinvention and innovation is why Motley Crue continues to attract fans young and old – many who weren’t even born during the band’s early reign. That fact proves that they are the rock band for all ages and eras.

But All Bad Things Must Come To An End and Motley Crue is taking one last trip around the world embarking on its victory lap in high-impact fashion. 2014 marks the onset of MÖTLEY CRÜE’s swan song, their Final Tour, which will take the band all the way through the end of 2015.