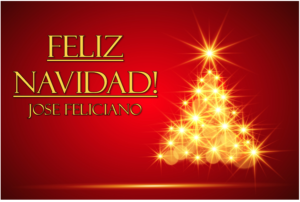 “Feliz Navidad,” is an almost fifty-year-old musical tradition on the radio in the U.S. One of the most popular Christmas songs of all time, Feliz Navidad was composed in the middle of the hot summer of 1970 in Southern California. When the song was written, Jose Feliciano and his record producer Rick Jarrard were working on an album of covers of Christmas songs for RCA. They included “Silent Night,” “The Little Drummer Boy” and “The Christmas Song.” Feliz Navidad added an original composition to the project and provided the name of the album.

Feliciano was coming off a hit with his version of the Doors’ “Light My Fire,” which in 1968 earned him his first two Grammys, for Best New Artist and Best Pop Vocal Performance (male). That same year, his career was negatively affected by a controversy over a rendition of the Star Spangled Banner at the 1968 World Series that today would be unlikely to create a stir. However, at the time it was considered by some to be objectionable.

The inspiration for Feliz Navidad reportedly came from Feliciano’s recollections of Christmas in his native Puerto Rico. Blind from birth, some of Feliciano’s earliest memories were of his mother listening to “boleros” on the radio played on a “cuatro” (four). A cuatro is a traditional Puerto Rican stringed instrument related to the guitar and mandolin. On the recording of Feliz Navidad, Feliciano played guitar and bass, as well as the cuatro. Paulinho Magalhaes, a member of his touring band, provided drums and percussion. Strings were later added.

Like so many successful pop songs, Feliz Navidad is a simple song in which simple lyrics are repeated. However, Feliz Navidad is different in that it first repeats a simple lyric in Spanish, followed by one in English (which is not a direct translation of the Spanish). The song begins with the chorus in Spanish repeated twice, followed by the hook in English repeated twice. Both are repeated twice again and then the song ends with the Spanish chorus.

An updated version of Feliz Navidad (2016) features a young boy, FaWiJo, who sings the opening of the song, and then is joined in a duet by Feliciano himself.

Jose Feliciano is known as a singer and guitarist, but the popularity of his distinctive voice has somewhat overshadowed his prowess as an instrumentalist. He is one of the greatest living guitarists in any type of music, having mastered not only rock, pop, blues and Latin music, but also classical and jazz. His repertoire includes the works of Mozart and legendary jazz guitarist Django Rheinhardt.

Among Feliciano’s accomplishments are more than 45 Gold and Platinum records, eight Grammys, and selection to Guitar Player magazine’s “Gallery of the Greats.” Jose Feliciano continues actively recording and performing his music, including “Feliz Navidad.”