Brian Ray On Getting The McCartney Gig

Brian Ray On Getting The McCartney Gig 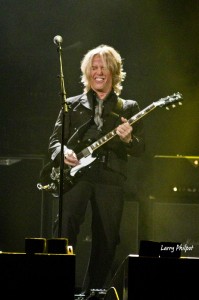 Here’s an interview with Paul McCartney guitarist/bassist Brian Ray from my book “How To Make Your Band Sound Great.

” In it he explains how the got the job with Sir Paul. As you’ll see, sometimes the gig of a lifetime happens in an unexpected way.
————————-

“At my birthday party my friend Abe (drummer Abe Laboriel Jr.), who toured with me with Mylene Farmer and Johnny Hallyday, told me he was now working with Paul McCartney and they were going on tour but were looking for a guitar player who could play bass.  I just put my arm in the air and said, “I’d love a shot at that,” which was way out of my character to do something like that. I’d always gone from gig to gig by word of mouth and I was normally too shy to stick up for myself like that.

A couple weeks later I got a call from Paul’s producer David Kahne to come to his office in Hollywood. We just talked music and then he handed me a bass and I played a little while we were just chatting. Then he handed me a guitar and we chatted some more when he finally said, “We’re doing one song at the Super Bowl in 2002 and we’re looking for someone to play bass. Are you into it?”  Of course I was into it!  He said that they were looking at a couple of other guys but he had a good feeling about me and would put my name forward. The next day I got a call to see if I could be on a plane to new Orleans the day after that to play a song with Paul McCartney!

I played the gig and it seemed to have worked out well. I was shaking Paul’s hand at the end where I said, “Thank you.  It was a real privilege and if I don’t get to see you again, thank you very much,” when I realized that I couldn’t let go of his hand (laughs), but he invited me back to the bar for a drink with the rest of the band.  At the end of the night he was saying his goodbyes to everyone when he said, “Welcome aboard, Brian.  Stick with Abe and Rusty (guitar player Rusty Anderson) to show you the ropes and I’ll see you in five weeks.” I couldn’t believe that I was in after only one song! So I just ran home and started woodshedding and cramming.

I set myself up like I was training for the Olympics and went through all his material from The Beatles to Wings to the solo stuff and just applied myself to it for five weeks, knowing that he may come in and change everything that I learned or even just let me go. So I didn’t treat it like I had the gig, I treated it like I had another audition. It just so happens that we had five days of rehearsal as a band before Paul got there so we were all prepared by the time he arrived. After the first rehearsal he said, “Hey guys, sounds great.  I’ll see you tomorrow.” That was really the first time I allowed myself to think, “I’m going on tour with Paul McCartney.”