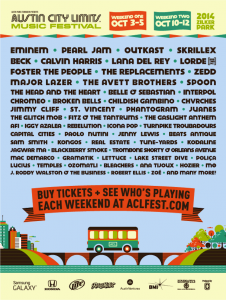 If you’re planning your weekends for this years music festival season, THE Texas festival to attend is not the early one that has 4 Letters in it’s name —  THE festival to attend is Austin City Limits, or (ACL) if you must use initials.  Forget the other one, regardless of the hype.  The bill for this year’s Austin City Limits festival isn’t especially surprising, but that’s like saying “it’s just a Bruce Willis movie.”  In other words, “normal” for ACL is off the chart great.   Hip hop stars Eminem and Outkast join hard rockers Pearl Jam atop the lineup for this year’s Austin City Limits Festival, which takes place over two weekends – Oct. 3-5 and 10-12 – at Zilker Park. The full lineup, which was released at 6 a.m. Tuesday also features electronic dance music acts Skrillex, Calvin Harris, Zedd and The Glitch Mob near the top of the bill and suggests Austin promoters C3 Presents have fully embraced DJs as a large component of their festivals.

This is one of the big festivals, and the sheer number of big names makes for a pretty impressive poster. As with last year, the show will come to the capital of Texas on successive weekends, taking over Zilker Park 10/3-5 and 10/10-12, bringing almost the exact same lineup both times. OutKast, Eminem, and Pearl Jam will headline this year’s best. The rest of the bill is stacked: Beck, Skrillex, Lana Del Rey, the Replacements, Major Lazer, Spoon, Belle & Sebastian, Interpol, Chromeo, Broken Bells, Chvrches, St. Vincent, Phantogram, the Gaslight Anthem, AFI, Icona Pop, Jenny Lewis, Sam Smith, Real Estate, tUnE-yArDs, Jagwar Ma, Mac DeMarco, Poliça, Temples, Mø, Cults, My Brightest Diamond, Young & Sick, and a ton of others will perform. Lorde is also on the bill, but only for the second weekend. You’ll find details at the festival’s website. And for those of you looking at this on your phones, we’ve got the full lineup spelled out below.