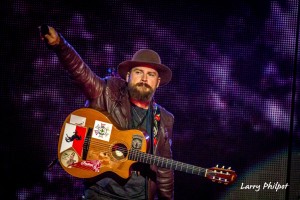 Last night, as the warm evening sun was setting in clear skies of early fall, wrapping up another season of outdoor concerts at the Klipsch Music Center in Indianapolis, The Zac Brown Band rolled into town in a barn burning two and a half hour performance that showcased the versatility of this lively group of talented musicians. This year’s tour is called Jeckle + Hyde, and expecting just another “bro country” set of songs about beer, trucks and being broke, this writer couldn’t have been more wrong.

The grass is still green in Indiana, but it’s early autumn, much like the scenery in the video below, and the crowd of 18,000 on the lawn on blankets, and another 6,000 under the pavilion had an evening they’ll remember for a very long time.

The Zac Brown Band are considered an American Country band, and based out of Atlanta, a night of country music was to be expected. Their first Atlantic album, The Foundation, was certified triple-platinum by the Recording Industry Association of America. Reported sales really don’t mean much to this writer because of the manipulation of the record labels, but the ZBB has collaborated with Alan Jackson, Jimmy Buffett, Kid Rock, Amos Lee, Trombone Shorty, Jason Mraz, Dave Grohl, and Chris Cornell. Given that, either this band is fun to be around, or they’re still growing.

Before the curtain went up, you could see the production was massive, with a runway out into the first 20 or so rows. The venue was filled to capacity as well, and while it seemed it took the band three or four songs before they started having fun, the crowd was treated to a variety of musical genres that covered Marshall Tucker, Southern rock, Metallica’s Enter Sandman, Let it Be,  and some Buffett. They had the Klipsch Music Center dancing along to an over-the-top cover of  Bruno Mars’ “Locked Out of Heaven” and just to prove they could do anything, they pulled off Queen’s Bohemian Rhapsody – and they did it astonishingly well. Just a poor boy and nobody loves them? Exactly the opposite.

Especially touching was the tribute to the armed forces. While every band thanks the servicemen and women, Zac’s was over the top with their rendition of “Dress Blues”, the Jason Isbell song, with video, and scrolling names of departed, complete with a U.S. Marine on the top tier of the elaborate stage saluting the crowd.

Tonight’s 150 minute show was served up on a very elaborate set, with two levels and two full light walls that rendered amazing video sequences. The eleven piece band and three backup singers had a repertoire of tricks up their collective sleeves, belting out songs with a blues feel to a distinct Jimmy Buffett vibe to a hard driving Metallica number.The banjo was especially nice, and made it clear that Mumford & Sons have nothing on these Southern boys. So, it this just a very good cover band? No, not at all. Read more below video…

With a sampling of all the genres, the common thread weaving it all together was the voice of Zac Brown. While not (yet) as distinctive or instantly recognizable as a Sinatra, Brown’s vocal range is great. A standout performance on guitar and grand piano by Coy Bowles sealed the deal, but each and every one of these musicians is multi-talented. A three piece horn section in a country band? Check. A drummer with a full kit beside a fun loving percussionist (Daniel de los Reyes) who plays congas as if they are just second nature?

Jekyll + Hydee? Just what the Doctor ordered. Grade:  A