We Will Rock You – The Musical By Queen 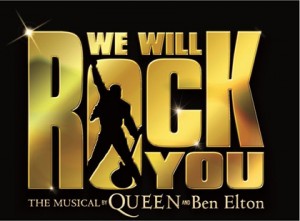 WE WILL ROCK YOU

The Musical by QUEEN & Ben Elton

Live in Indianapolis this May at Old National Centre

QUEEN AND BEN ELTON’S WE WILL ROCK YOU HAS RECEIVED AN UPGRADE FOR THE NORTH AMERICAN TOUR WITH MORE LAUGHS, MORE TECHNOLOGY, AND NOW HAS EVEN MORE QUEEN SONGS TO LOVE…AND IT’S COMING TO INDIANAPOLIS OPENING MAY 20 AT THE MURAT THEATRE AT OLD NATIONAL CENTRE

[INDIANAPOLIS, IN] The worldwide smash hit ‘rock theatrical’, Queen and Ben Elton’s We Will Rock You, built around 24 of Queen’s biggest hits, opens at the Murat Theatre at Old National Centre on Tuesday, May 20, 2014 and will stage seven performances through Sunday, May 25 (a full performance schedule is below). We Will Rock You is produced by Queen Theatrical Productions, Tribeca Theatrical Productions, Phil McIntyre Entertainment and NETworks Presentations.

This hilarious, multi-award-winning and record-breaking phenomenon is created by celebrated British comedian and writer Ben Elton (TV’s “Mr. Bean” and “The Young Ones”), and boasts a fantastic score of Queen’s biggest songs including “Another One Bites The Dust”, “Crazy Little Thing Called Love”, “We Are The Champions,” “Bohemian Rhapsody” and, of course, “We Will Rock You.”

For the US production, writer and director Ben Elton has redrafted his original script to resonate with US audiences as well as reflect the cultural changes since he first penned the storyline.

“Apart from addressing the broader social and technological changes, I also get the chance to update moments of topical humor,” says Elton. New additions to the show include the most current pop culture references (yes, there is a Miley Cyrus twerking joke!) and the addition of a new song, You’re My Best Friend.

“There is a scene where our two leads run away and discuss their loneliness and isolation,” Elton says. “In 2013, it seemed ridiculous for two kids to discuss friendship without reference to Facebook. Young people now live in a world where it’s possible to have many virtual ‘friends’ and ‘likes’ and yet still be entirely isolated and alone. The new dialogue with this changed emphasis brought the song You’re My Best Friend into the show.”

Tribeca producer Jane Rosenthal says, “With Ben’s updates, it’s almost a new show. However, in some ways, it was already ahead of its time when it opened in 2002. The overarching theme is a demand for individualism and intimacy in a world where everything is downloadable.”

Queen’s Brian May and Roger Taylor are musical supervisors to the show, taking an active role in casting the singer/actors and musicians for every production worldwide.

The show is in its 12th year at The Dominion in London’s West End, one of London Theatreland’s biggest theatres, making it the venue’s longest-running production ever. We Will Rock You is now officially the 9th longest running show in the West End and was crowned the UK’s favorite show at the 2011 Olivier Awards, the UK equivalent of the Tony Awards, in a category voted entirely by members of the public.

Outside of the UK, the show has now been seen in local productions in 17 countries, playing to an audience of over 15 million people.

We Will Rock You takes place in a future age on a planet once called Earth that is now controlled by a mighty corporation. Globalization is complete. Individuality is taboo. Everyone watches the same movies, wears the same clothes and thinks the same thoughts. Music is generated by the corporation’s computers, rock music is unheard and all musical instruments are banned. The hope of breaking free rests with an unlikely resistance – an alliance of rebel Bohemians, waiting for a hero to lead the battle to bring the power of rock back to the people.

“This show is all about legend,” says Ben Elton. “We take the legend of Queen and create our own fantastical story of young kids battling the mighty corporation who wants to suppress their individuality and their love of music. They need a hero who can help them in their struggle, and we have two – the dreamer Galileo, and the sassy rock chick Scaramouche. Guess who ends up winning?”

“Creating the show with Ben was very much a three-way thing,” says Roger Taylor. “It was great because he was a pleasure to work with and because he has such a fertile mind. He never stops churning out ideas.”

Brian May adds, “The amazing bonus is that Ben’s script subtly works as a metaphor too. People definitely come out of the theatre feeling that in a strange way they now know us, Queen, and our struggle, our journey.”

The original production of We Will Rock You is a Phil McIntyre Entertainment, Tribeca Theatrical Productions and Queen Theatrical Productions presentation.  Book and direction by Ben Elton. Music and Music Supervision by Queen/Roger Taylor and Brian May. Musical staging and choreography by Arlene Phillips. Production Design by Mark Fisher and Lighting Design by Willie Williams. Sound by Bobby Aitken. Costumes by Tim Goodchild. Tracey Flye is the Associate Director and Associate Choreographer of the North American tour.

Queen Theatrical Productions is a production entity created especially by the band’s parent company Queen Productions Ltd to handle the development and production of We Will Rock You.

Since 1995, NETworks has produced and managed over 55 touring productions in the US., U.K. and internationally. Current productions include Disney’s Beauty and the Beast, Blue Man Group National Tour,Elf The Musical, Flashdance the Musical, The National Theatre of Great Britain’s production of War Horse, Memphis the Musical, and Cameron Mackintosh’s spectacular new production of Andrew Lloyd Webber’s The Phantom of the Opera.

Limited amount of $75.00 Gold Circle Seats for each show

WE WILL ROCK YOU – Indianapolis Performance Schedule: