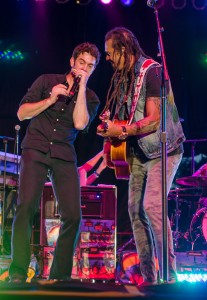 As Labor Day weekend drew to a close, fans from all over Indiana and the surrounding areas gather at Broad Ripple Park one last to celebrate a day full of live music, indie art projects, and good times. During what was likely the most crowded day of WARMfest, patrons enjoyed acts ranging from Trombone Shorty to Michael Franti. So one last time, readers are asked to delve into the dangerous depths of unknown music to discover the hidden pearls of WARMfest.

After Staying for the Weekend exited the Hawk Stage, Indiana natives Faux Paw fittingly continued the indie vibe inherent throughout the morning. The band, which sounds like the tonality and instrumentation of Blind Pilot but far less acoustic, attracted a number of new fans with their adventurous music. Note that adventurous in this sense is not meant to mean experimental, but rather literally apt for adventure. The huge, spacey guitar tones and the well thought vocals make Faux Paw the kind of band that should be listened to while discovering things. 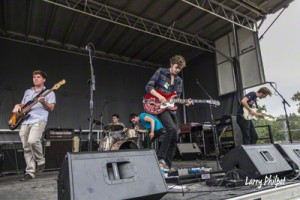 Monday seems to have been the day for modern alternative rock, as the next standout act, California Wives, also played a mixture of indie sensibilities with their own takes on songwriting and texture. Many critics compare California Wives to popular act Girls, which albeit is not an unfair comparison, but in many ways California Wives is so much more. The Chicago natives incorporate their guitar driven pop with dense harmonies and the occasional punk influence to create a new blend of rock. California Wives have already picked up a lot steam both through the internet and in person, but expect the group to experience continued growth for quite a few years to come.

Despite the success of indie rock during the last morning of WARMfest, the next group to take the River Stage, the Main Squeeze, took things in a different direction. Based out of Chicago but originally from Indiana, the Main Squeeze accurately describes themselves as a “raging funk experience”. The group would be at home with the likes of Lettuce and Al Green, though neither of those groups can boast the vocals as smooth as the Main Squeeze. The group certainly had no trouble convincing the WARMfest crowd to have a good time, and also set an appropriate mood for the rest of the evening. 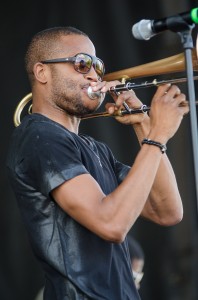 After the Main Squeeze, popular New Orleans jazz group Trombone Shorty began a rocking set. Of course, readers familiar with Trombone Shorty’s music will realize that his unique blend of music falls neither under the category of jazz nor funk nor rock, but rather resides in a unique category somewhere between the three. No matter what you classify Trombone Shorty’s music as, one thing was for sure: the audience loved it. By the time the group left the stage, a bigger crowd had formed than could be found for any previous act.

The night ended with headliner Michael Franti and Spearhead. Franti, who is no stranger to playing festivals, put on his usual stellar show. All the classics were heard, including “Sound of Sunshine” and “Say Hey”. The crowd loved his upbeat, fun attitude towards performing, and all in all Franti may have been the perfect act to end the weekend with. Few other acts would have been so aligned with the good natured atmosphere WARMfest had been striving towards all weekend.

The three day weekend had drawn to a close, and WARMfest shut the gates for the last time this year following Franti’s set. Whether or not there will be a second year for WARMfest is still questionable; while the cancellation on Saturday due to rain was no doubt extremely disappointing to a lot of fans, the last two days of WARMfest were otherwise quite successful. As music fans from Indianapolis and all over the rest of the country left Broad Ripple Park, it was hard not to feel a pang of sadness. Hopefully, the event continues to grow and next year will surpass this year, but until then, fans will have to be content with warm memories from throughout the weekend.