Last night was opening night in Indianapolis, at Banker’s Life Fieldhouse, the first of five nights. The show concludes on Sunday night, and tickets start at only $33.

Loosely inspired by James Cameron’s blockbuster, AVATAR, but with stunning scenery and a lavish production rarely seen on a touring event. Differing slightly from many of the other Cirque Du Soleil productions, instead of a series of individual performances, this is a story. While it may be a bit difficult to follow, so should you go see this incredibly colorful, action packed production – and it is highly recommended, here is a brief outline of each scene. 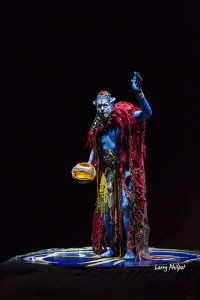 2. Omatikaya Clan
At the foot of the towering Hometree of the Omatikaya clan, Ralu and Entu, two sworn friends, are frolicking about.

3. The Game and Circular Drum
Amid the bustle of daily life, preparations for the coming-of-age ritual are in full swing as Ralu and Entu join in an athletic game to the beat of a huge circular drum. 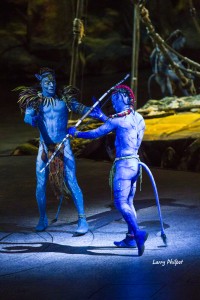 4. Inside the Hometree
When the game ends, we discover the life that thrives inside the massive Hometree. In preparation for the two boys’ initiation, the Omatikaya execute a performance on a Giant Loom that evokes Eywa weaving the connections between all living things.

5. Weaving Song and Initiation
Ralu and Entu face the first trial in their initiation to become hunters. Ralu succeeds, but Entu fails. Feeling humiliated, Entu fells toward the forest.

6. Shaman Story
A ceremony around a large fire pit marks the end of Ralu’s initiation and the Shaman sings an entrancing hymn to the great winged predator. When Ralu receives his first talisman, a loud thundering sound is heard.

7. Earthquake
The ground starts to tremble and the dismayed Omatikaya scatter in all directions, then all is silent. 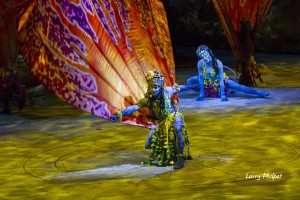 8. The Vision and the Aftermath
In a vision, the Shaman sees a stream of molten lava threatening to destroy the sacred Tree of Souls, the Na’vi’s direct link to Eywa. As he mobilizes the members of his clan to find a solution, the Chief of the Omatikaya forbids Ralu from joining in since he deems the youngster unready for such an important mission.

9. Clearing and Tree of Voices
Entu wanders into the bioluminescent forest, unaware that Ralu is looking for him. When Ralu finds his protégé’, he tries to convince him to return to Hometree, but Entu refuses. Under the Tree of Voices, the voices of the ancestors tell them that only Toruk can help save the Tree of Souls, provided they first gather five sacred objects. Suddenly, Viperwolves attack, but Tsyal helps them to escape by using a special seed. A swarm of Woodsprites suddenly gathers around the trio – a sign that a pure spirit is among them.

10. Tawkami Clan
Tsyal leads her new friends to her home among the Tawkami deep in the jungle amidst the bioluminescent plants. After Tsyal partakes in the harvest with other members of her clan, she introduces Ralu and Entu to her father, Chief of the Tawkami. He scoffs at the youngster’s plan to find Toruk. The two Omatikaya boys leave the forest empty handed.

11. River and Desert
As Ralu and Entu come upon a river, they are cornered by strange creatures and forced to jump into the stream. Carrying powerful seeds in her bag, Tsyal comes to their rescue aboard a raft. The three friends reach the desert and set off on foot. When night falls, the doze off under a starry sky. 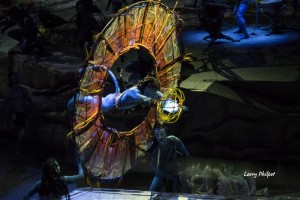 12. Anurai Clan
At dawn, while the trio is still sleeping, the Anurai get ready to perform a ritual for their totemic animal, the Thanator. They build the structure with parts of the creature’s skeleton. When the trio awakes, Ralu picks up a bone and recognizes it as one of the five sacred objects. He blows 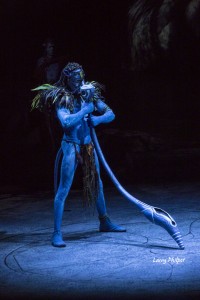 into it repeatedly, which draws Toruk’s attention. When they chase after the creature’s shadow, they are surrounded by six Viperwolves. The trio scamper off in the distance, a pack of angry Viperwolves on their tail.

14. A group of agile Tipani warriors chase away the Viperwolves, but when one of the six-legged creatures threatens to kill Entu, the Tipani Chief is forced to kill the animal. Angry at having to put a creature to death, the warriors test the trio’s valor in a symbolic battle. After the intruders unveil their plan to find Toruk, the unconvinced Tipani Chief sends them back home under escort.

(A) On the return journey, the reach a steep cliff where the trio try to escape on a Direhorse, in vain.
(B) At dusk, the trio and their two escorts arrive in Kekunan territory and stare in amazement at the flock of Banshees circling overhead. The unnerved youngsters duck and tumble away while the creatures hurtle from above. The Kekunan finally spot the trio and surround the intruders, but when the Chief notices the sacred objects that they carry, he recognizes the signs of the prophecy that is passed from generation to generation among his people, and agrees to help them pursue their quest.

16. Hallelujah Mountains
Guided by the Chief, the trio climb up to the Floating Mountains and make their way across a bridge made of ropes and vines. Ralu blows into the Thanator bone to attract Toruk. 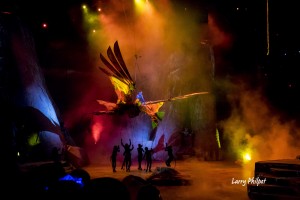 17. The massive scarlet and yellow striped predator looms overhead and threatens the trio. The sheer power of Toruk’s flight destroys the rope bridge on which Ralu and Entu were standing. Tsyal barely manages to repel the creature with her seed. Injured, Ralu entrusts his mission to Entu who takes off after the winged predator.

18. Lava and Flood
As the Chief and Shaman of the Omatikaya gather the other clans, a river of lava threatens to destroy the Tree of Souls. When all attempts to quell the blazing inferno with water have failed, the light emanating from the Tree of Souls dies out. 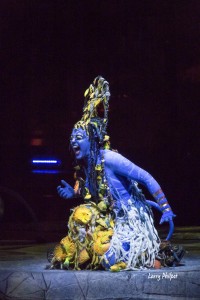 All hope seems lost. Suddenly, Entu descends from the sky riding Toruk. But when the creature approaches the Tree of Souls to enable Entu to grab onto the last glowing vine, it is severely wounded by the lava and comes crashing down near the island. The majestic creature draws its last breath and dies. Devastated, Entu walks toward the charred Tree of Souls and implores Eywa to help his people. The Omatakaya Shaman starts to sing a soulful chant.

20. Luminous Reunion
Swarms of Woodsprites suddenly appear and surround the Tree of Souls. As the reunited clans gather around Entu, the first Toruk Makto, the roots of the Tree of Souls slowly comes aglow. Gradually, light and life return to the three and the land all around. All rejoice. The Storyteller reveals his identity.  View a complete gallery, below: