She’s a “people person” and has a few things to say about the  a$$holes she encountered during the three day Texas festival.

[We wouldn’t have tried to express this sentiment any better and thank her for the contribution to Onstage Magazine and the shout out to Generations X, and Y. 🙂 ] 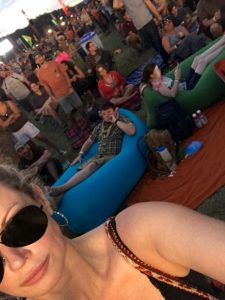 Ok. I know I’m old. I mean, I dragged my saggy ass over here at 2:30 with no makeup on and unwashed hair, wearing chevron striped knit flare leg beach pants that are two inches above my ankle, boy short underwear from 2009 with the crotch lip area stretched out just how I like it, a ten year old tank top that used to be black but has been washed so many times it’s now the color of the mysterious bruise I ALWAYS have somewhere on my thigh/shin/knee, a bra with one missing underwire and Chucks, just so I would be as comfortable as humanly possible.

I caught the end of Saint Motel, jumped around to LL Cool J for an hour in the insane humidity, applied an extra large Aspercreme lidocaine back patch to my sciatica to numb my right side, used my asthma inhaler and choked down a handful of Advil with two full cans of Coke so I could mosh a little bit at Cage the Elephant and was still so fucking tired I had to bag Kendrick Lamar.

I get it. My festival days are numbered.

But here’s the deal. Like each of you two fuckers, I bought ONE wristband to get in to this cluster. And I feel like that one wristband buys me enough space for myself, a bag or backpack, maybe a small chair (if I was a pussy and used a chair at a fucking outdoor music festival, which I would never do. But you get the idea) or blanket to sit on.

What the wristband does NOT buy me, is enough area to recreate the bedroom setup I have in my grandmas crawl space. You cannot be serious with this shit! What are you, 20 years old at the most? This is a CONCERT. With REAL, LIVE PEOPLE. The entire point of the endeavor is to enjoy the same music you hear from that one working speaker your Uber drivers car has, while simultaneously entering reality and being forced to touch the bare skin of disgusting people who you would normally never come into contact with in everyday life, most of whom are on some kind of drug and don’t even know that they are there, let alone that their bare feet are bleeding and infected from the various bodily fluids we are all standing in. Why else would we be here?

Meanwhile, you two space hogs are taking up, like, five wristbands worth of area by dragging in your bedroom futons, and then fashioning some kind of makeshift rug to place your supplies on, therefore depriving at least three other people from having decent seats. You know what? There’s already a place you can go to sit with your backs to each other, listen to music, text and drink an endless supply of bottled water.

It’s called: your own bedroom.

Music festivals demand interaction, you fuckheads. Believe me. I hate everyone I meet as much as the next person. In fact, here’s a newsflash: We all hate each other! That’s the human condition. This is why we have things like concerts, so that people have an actual reason to leave their houses and take in the pungent aromas of people from all walks of life. Cage The Elephant is never going to come to your house and play a show. Ever. So you know what? You don’t get to bring your fucking house to a Cage The Elephant concert. You have to choose. Live music? Or night 2,365 in a row of jerking off to Japanese anime while eating Hot Pockets?

You can’t have both.

Get the fuck out of here. Seriously.

PS. For  what it’s worth, I vote for the anime. You’ve made it this far without interacting with actual humans. Why ruin a good thing?