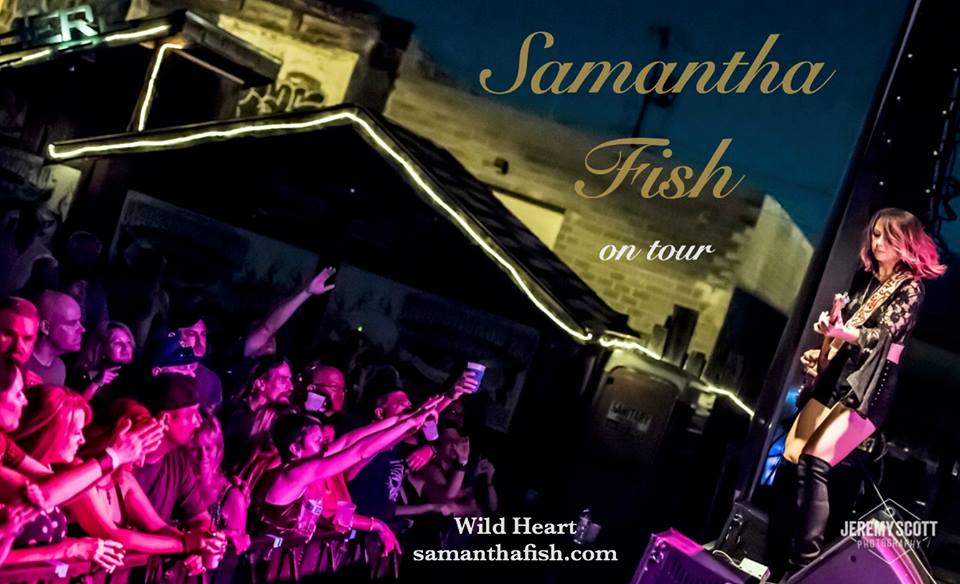 Kicking off the new leg of her Wild Heart Tour at The Warehouse in Carmel last night, Samantha Fish and her band hit the stage hell bent on giving the audience their money’s worth.

And that’s just what happened for the hundred or so people who attended this energetic, intimate evening of music, the first of nineteen shows that will have Samantha and company on the road until after Thanksgiving.

Opening the show with the rocking “Turn It Up”, Fish, drummer “Go-Go” Ray Pollard and bassist Chris Alexander proceeded to prove that they are ready to be back on the road with two one-hour sets of blues.

Fish’s vocals were as strong and engaging as her guitar-playing, whether she sang and played slow, smoky blues or proceeded to seemingly shred her voice and guitar on high-energy original and cover material.

Switching between her Delaney “Fish-o-Caster”, Stogie Box Blues Guitar, Oil Can guitar, and Taylor acoustic guitar, Fish demonstrated why she is considered one of blues music’s up-and-coming artists, deftly working the fret boards of whichever instrument she happened to be playing.

A highlight of the evening was when Fish took up her acoustic guitar and performed an impressive cover of Charley Patton’s “Jim Lee Blues Pt. 1” then maintained the mellower mood with an original song “Go Home”.

Then it was back to an electric guitar and the trio began to pick up speed with “Don’t Say You Love Me” and Screamin’ Jay Hawkins’ “I Put A Spell On You.”

The trio continued to build on the momentum of the evening for the remainder of the show with cover and original songs, including R.L. Burnside’s “Wish I Was in Heaven Sitting Down”.

This was definitely a high-energy evening of music presented by a talented trio of young artists who enjoy rockin’ the blues night after night.