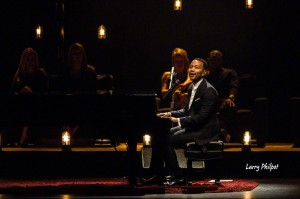 Billboard is reporting that Sam Smith and John Legend have teamed up for a good cause. The two soulful singers have recorded a new version of Smith’s “Lay Me Down” for the U.K. charity Comic Relief’s Red Nose Day.

All proceeds from the track’s sale will go to the charity. In addition to the recording, the singers will appear at the “Comic Relief: Face the Funny” event on March 13. The event will take place at the London Palladium and will air on BBC One.

” ‘Lay Me Down’ holds a very special place in my heart,” Smith said. “Not only did I perform it at the Brits, I’m now going to perform it live on the Red Nose Day show with the extremely talented John Legend.”

“I recently visited a Comic Relief-funded project in my hometown which supports the young LGBT community in London,” Smith added. “I’m extremely proud that my single will help raise money for projects like this and many others in the UK and across Africa.”

For his part, Legend gushed about his Grammy-winning collaborated. “Sam is such a talented artist. We’ve been looking forward to working together for a while now,” he said. “I’m so glad we could collaborate on such a great song and for such a great cause.”