Rival Sons Kick off US Tour 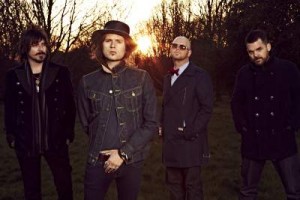 Maximum-blues-infused, rock ’n’ roll band RIVAL SONS are excited to announce a 14-city tour beginning August 20 with stops including Chicago, Milwaukee, St. Louis and Lake Tahoe, wrapping in San Francisco September 7 (full tour itinerary below). The Long Beach, CA-based group has been invited to perform a select number of shows with one of their hometown heroes, Sammy Hagar, on his “Four Decades of Rock” summer tour.

Guitarist Scott Holiday says, “Well, we’re finally hittin’ our homeland for a handful of tour dates. Ask and ye shall receive! And what a cool thing to get to go out and support a legend…and super cool fella like Mr. Sammy Hagar! I think this one’s gonna be a blast.”
Hagar has been a fan of the Rival Sons for a while, since he first heard their 2009 debut Before The Fire. “These guys are the real thing,” says Hagar. “Their first CD was great, showing off a lot of styles from the 60’s, 70’s and 80’s. These boys have done their homework…now road-tested. The Sons have made a CD (Head Down) that truly lives up to the band’s name. This is a giant step from a great previous CD…not easy. But for those that like classic rock but are tired of the same old songs, I highly recommend this CD…and even better, go see ’em live–they deliver.” Hagar and RIVAL SONS frontman, Jay Buchanan, come from the same town of Fontana, CA.
RIVAL SONS–Jay Buchanan (vocals), Scott Holiday (guitar), Robin Everhart (bass) and Michael Miley (drums)–just concluded an international headlining tour with shows in Canada, Europe and the U.K. as well as a string of dates in the Midwest U.S. May 29-June 4. REAL DETROIT WEEKLY recently noted of their packed show at St. Andrew’s Hall: “These guys not only have the sound, but the look and the mojo to make anyone pay attention.” (6/5) EXAMINER.com exclaimed of the show at Reggie’s in Chicago, “Rival Sons cast a spell…” (6/9)
The band is on the road supporting their third album HEAD DOWN (released March 19th on Century Media Records), which reached #1 on the Rock chart in 2012 in the U.K., garnered the group four-star reviews (including Mojo and the Guardian) overseas as well as magazine covers and the “Breakthrough Artist” award at the 2012 Classic Rock Awards show in London. The album features “Keep On Swinging,” which hit #1 on the Active Rock Radio Charts in Canada and remained at the top for six straight weeks. The band made their major national television debut when they performed “Keep On Swinging” on ABC-TV’s “Jimmy Kimmel Live!” in March, which can be viewed here: http://www.hulu.com/watch/464788
RIVAL SONS are also set to perform two shows at the Telluride Festival, July 13 in Colorado. They’ll perform a main stage show during the day along with Steve Earle, Rodrigo y Gabriela and Big Head Todd & The Monsters. They’ll also perform a headlining show that night at Telluride’s Sheridan Opera House. See the full line-up here: http://www.ridefestival.com/home/schedule/

Long Beach band Rival Sons are a raucous, maximum-blues-infused, rock ‘n’ roll band that explode with the rhythm and thrill of some of the greatest live acts of all time. From their 2011 album Pressure & Time to this year’s breakthrough Head Down the strength of their live performances has gained the band major attention everywhere. Recent accolades include, a stint opening up for Guns ‘n’ Roses last year, plus legends like Judas Priest, AC/DC and Alice Cooper, and playing the likes of Download festival, Rock Am Ring, Sonisphere, T in the Park, to name a few European festivals.
Head Down charted at number 1 in the UK rock charts for several weeks and number 31 in the UK national chart. The band’s intense work agenda (with an aim to release an album a year), plus their grueling live schedule, have won the band a reputation for hard-graft. In the studio the band commit themselves to creating an experience that closely matches the attitude and excitement of their live performance. Right off a four-week stint on the road, Rival Sons wrote, recorded, and mixed the album in just twenty days; ensuring rawness for both the listener and the band.
In October 2012, Rival Sons finished up their UK leg of the sold out European “Head Down” tour with a fantastic show at the Electric Ballroom, introduced on stage by legendary presenter Bob Harris (of the Old Grey Whistle Test), and with Jimmy Page in the audience.
Bob Harris: “Absolutely love this band…I had such a great night with them when they played in London, I introduced them onstage, Jimmy Page turned up backstage just before the band went onstage it was an incredible evening and I really think they’re something special…”
Garnering fans amongst music-lovers, celebrities, indie-kids, rockers and comedians alike…
Juliette Lewis: “Holy shit! I think you’re my new fave band!! Good god I love your groove!”
Vic Reeves (comedian): “The new Rival Sons LP kicks your arse way off into outer space them retrieves it and kisses it goodnight.”
And last week, Corey Taylor cited the band as his new favorite on “That Metal Show” with Eddie Trunk saying, “My favorite new band…it’s the Rival Sons. They are really good. There is something about that band that is very Zeppelin-esque. The best 70s album that nobody ever heard.”
At the end of last year Classic Rock magazine made Rival Sons the cover stars of their November issue, and Head Down was voted the no.2 album of the year by the editorial team. Despite the achievements and following Rival Sons have already attained, any member of the band will say creating quality music and leaving a lasting impression is what matters most, and now they hope to convert their home country as they have already converted Europe.