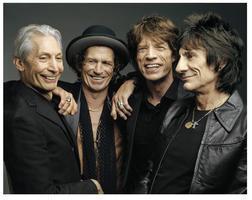 The Rock and Roll Hall of Fame and Museum and Case Western Reserve University will honor the Rolling Stones during the 18th annual Music Masters series this October in Cleveland.

The Rock and Roll Hall of Fame and Museum and Case Western Reserve University will honor 1989 Rock and Roll Hall of Fame inductees, the Rolling Stones, during the 18th Annual Music Masters series It’s Only Rock ‘n Roll (But I Like It): The Music of The Rolling Stones beginning Monday, October 21 through Saturday, October 26, 2013 in Cleveland. This year, the series will be renamed the Annual Music Masters to reflect the historical evolution and expansion of the rock and roll story. The series is sponsored by ELS Surround.

The tribute concert on October 26 will be anchored by a group of top flight musicians who have performed with the Rolling Stones over their 50 year career and contributed to shaping the band’s extraordinary sound. Grammy Award-winning drummer Steve Jordan will lead the house band as musical director. Jordan has assembled a group of critically-acclaimed musicians, including Rock and Roll Hall of Fame inductee Ian McLagan, Lisa Fischer, Bernard Fowler, Bobby Keys, Steve Madaio, Ivan Neville, Waddy Wachtel and Willie Weeks to perform. Additional artists will be announced in the coming weeks, along with a schedule of events.

“We are very excited to expand the stories we tell in the Music Masters program,” said Lauren Onkey, vice president of education for the Rock and Roll Hall of Fame and Museum. “Rock and roll caught fire around the world, and we want to reflect that in this program. The Rolling Stones were inspired by so many great American artists in creating their own original brand of rock and roll – it’s an incredible story. We have an outstanding band to showcase the music of the Stones.”

“The Museum is proud to honor the Rolling Stones during their 50th anniversary year,” said Greg Harris, president and CEO of the Rock and Roll Hall of Fame and Museum.  “In addition to our blockbuster exhibit, which has attracted hundreds of thousands of visitors from around the world, we will take this opportunity to dig deeper into the story of this groundbreaking band that challenged and changed the face of rock and roll.”

The 18th annual series begins on Monday, October 21, and will feature interviews, panels, films and educational programs throughout the week, including a keynote lecture at Case Western Reserve University. On Saturday, October 26, a conference will be held at the Rock and Roll Hall of Fame on the Rolling Stones’ impact on popular music. The tribute concert will also be held Saturday, October 26, at 7:30 p.m. at PlayhouseSquare’s State Theatre in Cleveland.

Tickets to the October 26 Rolling Stones tribute concert range from $30 – $80. Tickets go on sale to Rock Hall members on Monday, September 16 at 10 a.m. via online sale only at www.playhousesquare.org. Tickets to the public go on sale Wednesday, September 18 at 11 a.m. Public tickets are available at www.playhousesquare.org, by calling (216) 241-6000 and at the PlayhouseSquare ticket office. A limited number of VIP packages are also available beginning at $250 by contacting the Rock Hall’s development office at (216) 515-1201 or development@rockhall.org.

Grammy Award–winning singer Lisa Fischer has toured with the Rolling Stones since 1989 and has performed with Tina Turner, Luther Vandross, Sting and Chaka Khan. She was recently featured in the film Twenty Feet From Stardom.

Like Fisher, Bernard Fowler has performed with the Rolling Stones on every tour since 1989. He has also been a featured guest vocalist on many solo albums released by the members of the band, including Mick Jagger’s first solo album, She’s The Boss.

Steve Jordan, leading sideman, session player, acclaimed composer, musical director and drummer, has worked alongside Eric Clapton, Aretha Franklin, Beyoncé, Bruno Mars and many others. He appeared on the Rolling Stones album Dirty Work and is a member of Keith Richards’ band the X-Pensive Winos.

Saxophonist and producer Trevor Lawrence performed with the Rolling Stones in 1973 and 1975. He has recorded with many legends over the course of his career, including Stevie Wonder, Marvin Gaye, Bonnie Raitt, and B.B. King.

Most frequently heard performing with Stevie Wonder, trumpeter Steve Madaio was featured on the Rolling Stones‘ 1973 European tour.  Madaio’s skills have been showcased on stage or in the studio alongside Rock and Roll Hall of Fame inductees John Lennon, Etta James, James Taylor, B.B. King and Donna Summer among countless others.

Ian McLagan is a Rock and Roll Hall of Fame Inductee as a member of the Small Faces/Faces. He has worked with a wide range of legendary artists and has performed with his Bump Band since 1979. McLagan played on the Rolling Stone’s Some Girls album and toured with the group in 1978, 1981 and 1982.

Keyboardist Ivan Neville played on the Rolling Stones‘ Dirty Work and Voodoo Lounge albums and is a member of Keith Richards’ band the X-Pensive Winos. He leads the funk band Dumpstaphunk and is the son of renowned New Orleans vocalist Aaron Neville.

Guitarist and composer Robert “Waddy” Wachtel has recorded or performed with dozens of Rock and Roll Hall of Fame inductees including Bob Dylan, Tom Waits, Carole King, Stevie Nicks, James Taylor, Iggy Pop, and Jackson Browne. He is a member of Keith Richards’ band the X-Pensive Winos and played on the Rolling Stones’ Bridges To Babylon album.

In-demand session bass guitarist Willie Weeks has recorded and toured with Rock and Roll Hall of Fame inductees such as Eric Clapton and George Harrison among many others. He played bass on “It’s Only Rock ‘n Roll (But I Like It)” by the Rolling Stones.