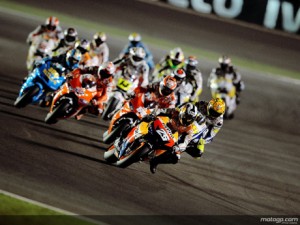 3LAU (pronounced Blau) became fascinated with music at age 5 when he taught himself to play the piano and later guitar and drums. Now he prepares his original mixes with each track beginning on the piano.

In finding creative insight from inspirations such as Sigur Ros and Radiohead, 3LAU aims to bring beauty, melody and emotion back into dance music. This year marks a fresh chapter for 3LAU as he transitions from mash-up guru to big room house producer.

3LAU has taken the electronic music scene by storm after joining the release circuit less than two years ago. He amassed widespread acclaim with two eclectic collections of bootlegs titled “Dance Floor Filth,” a term that continues to describe 3LAU’s unique sound.

3LAU has earned top-10 chartings at Beatport & Hype Machine as well as a reputation for flawlessly blending bootlegs, remixes and originals into fast-paced DJ sets that keep crowds guessing.

All performances in the RBIGP Moto Midway in the IMS infield are free with admission at the track for each day. A glance at the additional performers:

•Space Capone: An entertaining group that will bring its funky, disco-tinged party music to the Moto Midway stage, Space Capone features a nine-piece band with a strong horn section and guitar solos that bring the sounds of the late 1970s and early ’80s dance music to fans across the country. Founded in 2008, Space Capone has become an entity of phenomenal musicians that share the passion for classic R&B but also bring their own elements to the table.Space Capone’s self-titled debut album was released by AVJ records in late 2012.

•Guns 4 Roses: More than just a highly-acclaimed Guns N’ Roses tribute band, Guns 4 Roses thrills its many fans by putting on a full-stage production while playing hits such as “Welcome to the Jungle” and “November Rain.” Members of Guns 4 Roses have performed on stages across the United States, Canada, Mexico and Central America with artists such as Vince Neil from Motley Crue and Bret Michaels from Poison.

•The Features: An indie rock band that over the years has served up hook-fueled songs with subtle nods to new wave, 60s garage music, Southern rock, krautrock and beyond, The Features have constantly retooled their sound through the years over the course of countless shows and practice sessions. Two members of the current band lineup, Matt Pelham and Roger Dabbs, attended middle school together in Sparta, Tenn., and started playing music together out of boredom in 1994. The group has progressed from playing various bars and clubs in the early years all the way to releasing their fourth album, “The Features,” on May 14.

•RECOIL: Named the Best Local Rock Band and Best Local/Tribute Band in Indianapolis in the 2013 NUVO Reader’s Choice Best of Indy voting, RECOIL has been called the area’s best party band. A hard rock powerhouse combining years of live experience with outstanding on-stage production, RECOIL treats its audience to a live experience that’s second to none.

•Jasmine Cain: Nominated for a record breaking seven MCMA Awards in April 2013, rocker Jasmine Cain is living her life through her songs and gypsy spirit like a modern-day Janis Joplin. With four self-released albums since 2004, Cain has sold more than 20,000 albums, and her live performances are stadium-quality rock shows. Cain is a songwriter, lead vocalist and bassist for her band of rebel rockers. Her raw and emotional songs are presented to audiences through a unique voice that is a mixture of strong, aggressive, soul-filled attitude.

•Street Spirits: Street Spirits is a band that started as the solo project of singer-songwriter Todd Heaton, who recorded an EP titled “Todd Heaton’s Street Spirits” that was released in spring 2011. The recordings were written and recorded in a small studio apartment in the Woodruff Place neighborhood on the near east side of Indianapolis. The content of the recordings were based off Heaton’s experiences and his mindset as a suburban teenager. The group’s music has been described as atmospheric dream pop filled with ghostly echoes reaching decades into the past for ethereal guitar tones and Phil Spector-influenced drums.

•Brent James & The Vintage Youth: A rocker who grew up in Frankenmuth, Mich., listening primarily to rap music, James is a versatile songwriter and musician who learned how to play the drums at age 17 before picking up the guitar two years later. James, who has recently begun studying the harmonica and piano, has been influenced musically by many artists including John Mellencamp, Led Zeppelin, Bob Dylan, Neil Young, Bob Seger and a number of rap artists from the 1990s. James released the album “Moment of Silence” while as leader of the band Brent James & The Contraband.

•DJ Orion: Hugh Jeffner, better known as DJ Orion, is an Arizona native with more than two decades of turntable-smashing sets to his credit. This enigmatic performer has been nominated three times for Radio Mixshow DJ of the Year (2010, 2012, 2013) while rocking dance floors everywhere crafting a unique and unmistakable sound. Razor-sharp DJ skills, a solid studio IQ and rock-steady performances on national stages have made this polarizing entertainer a must-see event. Orion’s love affair with vinyl records, samplers and talent to match has produced one of the most successful radio DJ’s in the US.

•Slater Hogan: A local DJ who has rocked parties from London to Sydney to Paris and Chicago, Hogan brings a flavor of love for the party and the partygoer. Hogan, who has more than 100 releases available on Beatport, Itunes, Stompy and Traxxsource, encourages his fans to lace up their dancin’ shoes and get ready for madness on the dance floor. An Indianapolis Cathedral High School graduate and admirer of acts such as New Order and Depeche Mode, Hogan discovered house dance music, a form of electronic music he emulates, during his undergraduate studies at Butler University.

•High Octane: The Indiana Pacers High Octane drum line performs in and around Bankers Life Fieldhouse entertaining fans and adding a touch of collegiate atmosphere to Pacers functions and game night festivities. The group practices twice a week in the fall and once a week once the NBA season begins. High Octane features approximately 10 performers ages 16 and older with backgrounds in pageantry art performance such as marching band and drum corps.

The complete stage schedule at the Moto Midway during the Red Bull Indianapolis GP (subject to change):

The RBIGP race weekend will also include competition in the Moto2 (600cc) and Moto3 (250cc) World Championship classes featuring riders from around the world. The distinctive rumble of American V-Twin thunder also will be heard and felt for the third consecutive year on track at IMS, as the AMA Pro Vance & Hines Harley-Davidson Series returns with races on Saturday, Aug. 17 and Sunday, Aug. 18.

In addition, electric-powered race motorcycles capable of reaching speeds of 180 mph will compete for the first time at IMS in a round of the FIM eRoadRacing series featuring teams from across America.

Information on camping at IMS during the Red Bull Indianapolis GP is available at www.ims.com/tickets. Hotel package information can be found at visitindy.com/redbullhotels.