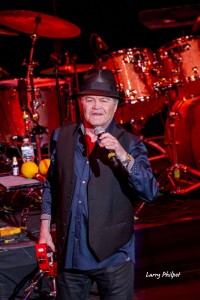 Last night at the Murat Theater in Indianapolis,  Micky Dolenz and Peter Tork rebooted the Monkees franchise with an excellent two hour plus, 31 song, retrospective that hit all the high spots and none of the low, The concert including new songs from their new album Good Times. Micky is 71, Peter is 74 years, yet the duo did the work of four men, and then some. I heard a person in front of me state that this seemed like the Micky Dolenz show, but you have to have a front man, and Micky has been on the stage since Circus Boy.

Broken into two sets, with a new song per set, a Davy song per set, and a song originally sang by Mike Nesmith per set. The Dolenz/Tork duo fronted a first rate team of session pros with an especially clever lead guitarist who handled all the solos effortlessly. Mike Nesmith was rumored to join the tour via Skype for a couple of songs, but that didn’t happen. There was an isolated track of Davy on a recording for “Shades Of Grey” and video for a penultimate “Daydream Believer”. Peter covered Mike’s “What Am I Doing Hanging Round”. And Peter and Micky traded vocals on Davy’s “A Little Bit Me, A Little Bit You”. 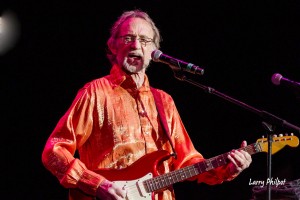 If this all sounds a little bit “The Monkee’s Experience “ as opposed to the real thing, you are right but not entirely. The difference is one of attack, with three or four Monkees on stage, the last couple of decades, the boys took it as an opportunity to regurgitate the story… which we all know very well by now. Last night, the band jettisoned their history to a degree. Yes, there was clips from the TV show running throughout the gig, including commercials for Rice Krispies, but the band themselves streamlined the set and let the songs speak for themselves. Tork and Dolenz shared the spotlight and while they were selling nostalgia, they weren’t just selling nostalgia. The band was tight, they really did rock, and both Monkees gave concentrated energetic and spot on performances. The last time I saw Dolenz, solo, he had returned to his roots of acting, doing a live version of “Hairspray” at the Hilbert Circle Theater. As a Monkee, he went falsetto 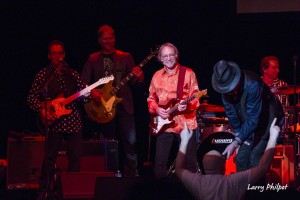 during “Going Down” , and mid song, Micky shoved the microphone in the face of a guy in the front row, who sang an entire stanza without missing a beat — or a word (see photo #3). Dolenz is a major entertainer, always has been, and this night he was entertaining in a rock and roll vein. While not appreciably better than any other time I’ve seen him, he worked Tork as a perfect foil and gave an easy going but professional show. Dolenz still has his chops on the drums.

Tork was a very pleasant surprise. and is reported to have Asperger’s Syndrome, which could be why he always appeared a little goofy during the TV 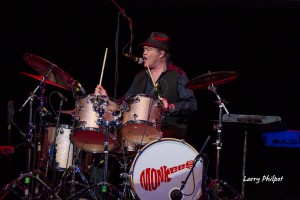 show and why solo he seemed, for all his gifts, not quite perfect. But with Micky last night, whatever questions we might have were answered. I’ve never seen him better, I don’t mean musically, the man has always been a fine musician, but as a live performer: he big upped an “Auntie Grizalda” with a just as good if not better “For Pete’s Sake”, added back up to “Papa John’s Blue” before doing well by “What Am I Doing Hanging Round”. It is not that Pete was better than Mickey, it was that he was as good as Mickey. 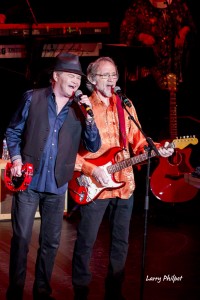 Yes, given the circumstances, the Monkees danced through 31 songs with finesse and intelligence, performed them well, covered for their missing friends, and left the audience absolutely with their money’s worth. Click on any photo for the larger version. 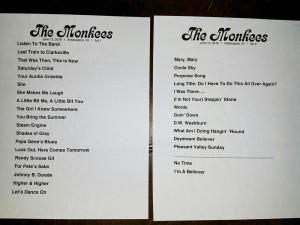