Miranda Lambert in Indy on May 14th 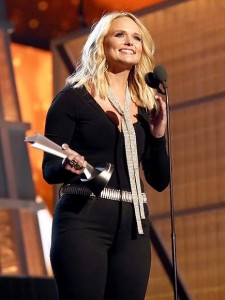 Miranda Lambert will bring her “Keeper of the Flame Tour” to Indianapolis’ Klipsch Music Center on Saturday night, and a few seats are still available. Indianapolis will be only the second stop of this tour, and touts supporting acts Brothers Osborne, and Kip Moore, stars in their own right, and promises to be one of the best shows, and the season opener at Klipsch,

Grammy Award winning singer-songwriter Miranda Lambert is the reigning six-time CMA and seven-time ACM Female Vocalist of the Year (the first time any female has won 7 consecutive years). The first single off of Lambert’s fifth studio album, Platinum, “Automatic,” was Lambert’s highest charting first week single to date and won CMA and ACM “Song of the Year”.  Her duet with Carrie Underwood, the album’s second single, “Somethin’ Bad,” has been certified as an RIAA Platinum Digital Single.

Platinum, made history when it debuted atop Billboard’s Top Country Albums Chart, making Lambert the first country artist in the history of the chart to have each of her five albums debut at number. Platinum also debuted at the top of the all genre Billboard 200 as the number 1 album in the Nation.

In addition to her award winning music, she dedicates much of her time to her MuttNation Foundation, an organization that supports shelters and helps pets find a forever home. She also owns two lifestyle boutiques, general stores she named, The Pink Pistol, that are located in her hometown of Lindale, Texas, and Tishomingo, Oklahoma. Visit  www.MirandaLambert.com for specific date announcements.