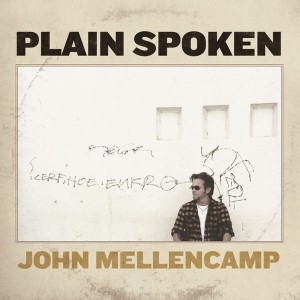 Last week on the Tonight Show, John Mellencamp sat in with the Roots and before the first break, Jimmy Fallon iterated Mellencamp’s litany of hits punctuated by a Questlove rimshot: “Pink Houses” , “Jack And Diane”, “Small Town”, “Hand to Hold On To” “R.O.C.K. In The USA”… on and on and on. It was a reminder of just how deep the Mellencamp catalog is and personal faves “Hurts So Good” and “Rain On The Scarecrow”, the former a Stones rip that Bon Jovi would be proud of, the latter a terrifying blues track of such darkness Dylan could put his name to it, a reminder of where a love of the Stones can take you.

Last weekend, Mellencamp performed at his 27th farm Aid. Yeah, the small town boy AKA Cougar has gone well past his hard rocking, honeysuckled early days and stands as an elder statesman, with his superb latest album, Plain Spoken as a testament to how far he has flown.
The problem with Plain Spoken is the problem with Mellencamp.  in a world of poets and dreamers, he is a straightforward guy, who took the glam out of classic rock and presented it as straight ahead hard hitting rock and roll.  Then  he grew older, deeper, more worried, more concerned, and, as he told Rolling Stone two years ago, “I write about the human condition”. It isn’t that he doesn’t write metaphor but rather that he handles it with such unblinking intensity [that] you can’t hide from it.
On his new self-produced album (T-bone Burnett is the executive producer this time), Plain Spoken, he comes across as brusque to the point of take it or leave it. On “Sometimes It’s God”, Mellencamp sounds like a young Leonard Cohen and he expresses the way in which faith works with a straightforwardness that stands in stark contrast to a Dylan. Mellencamp sang “Sometimes it’s God, sometimes it’s just not”, Dylan sang “I hear the ancient footsteps like the motion of the sea, sometimes I turn, there’s someone there, other time it’s only me.” A similar sentiment but a world of difference, one assumes an instant understanding, in the latter, one needs to deepen the thought to fully get it, but the idea remains the same.
The real ability to express yourself clearly in the starkest of terms is a gift, and it becomes even more clear on the nursery rhyme civic lesson “Freedom Of speech.”  This could be written for John’s five grandchildren, with a jaunty violin leading to a sing song with a snappy answer to freedom of religion, “freedom to believe that we’re all candy canes.” Say Amen and pass the skittles. The lightness of the track is passing fair, because everything around it is darker.

Burnett has been working with Mellencamp since 2008 and is much like Rick Rubin at least in that he likes to record his heroes plainly. But this has more of a rockers feel, more of a flourish than Mellencamp’s last two albums There are shadings, a ringing Keith Richards-like guitar on “The Brass Ring” a smashing harp on “Lawless Time”, to pull you into the songs. “The Company Of Cowards” is very Dylan-like,  but not Dylan of any particular time, but seems to harken back to the Dylan of John Wesley Harding.  “Tears In Vain” apparently about John’s divorce (or recent breakup) is as dark as anything on Blood On The Tracks and again the harp and the drums, pull you into the nightmare story of infidelity. Perhaps the best song of a set which maintains the highest of standards for a full 43 minutes and ten songs, “The Company of Cowards” seems to revel in its love song, a lilting waltz and a tribute to a woman.

I was reading about England in the 1600s about the landed gentry, why to be part of the politics of the country you had to own land, money wasn’t enough. The reason was simple: if you owned land you’d fight for the land, if you had money you would simply move it elsewhere. This is a truth Mellencamp seems to instinctively understand, these songs are about people with a different sort of understanding of life, a different type of connection to the land: that’s why he plays Farm Aid. Plain spoken, from the earth to the earth, American homeland, Mellencamp plain spokenly speaks for it and us on a fine, folk rocker album.