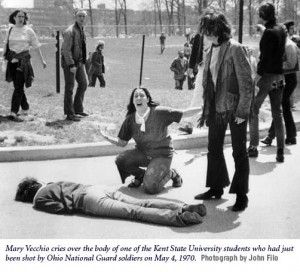 On May 4, l970 members of the Ohio National Guard fired into a crowd of Kent State University demonstrators, killing four and wounding nine. The shootings on the KSU campus symbolized the deep divisions that so sharply divided the country during the Vietnam era.

A photograph of Mary Vecchio, a fourteen year old runaway, down on one knee, screaming over the body of Jeffery Miller appeared on the front pages of newspapers and magazines throughout the country, and the photographer, John Filo, won a Pulitzer Prize for the picture. John Filo, a Kent State photography major in 1970, continues to works as a professional newspaper photographer and editor.

“Blood was just pumping out of his body, on the hot asphalt,” Filo told Annenberg Digital News. Then he spotted Vecchio. “I could see the tension building in this girl and finally she let out with the scream, and I sort of reacted to the scream and shot that picture.”

Neil Young considers Ohio the best song he wrote with CSN&Y.  It was released as a single, but the song did not appear on an album until Crosby, Stills, Nash and Young included it on their live album Four Way Street a year later.

“Crosby came and had the magazine with the Kent State killings,” said Young. “I had heard it on the news, what had happened, but Crosby always had a way of bringing stuff into focus.”
“Crosby called me up and said he’d booked a studio,” bandmate Graham Nash recalled in MusicRadar.  “‘Neil just wrote this song, it’s f—ing fantastic. Get down here.’ Neil played me ‘Ohio,’ and it was ‘Holy f— – fantastic.’ We recorded it in an hour and a half.”

“Ohio” would be the singer’s first protest song. “It’s still hard to believe I had to write this song,” Young, a Canadian, explained in the liner notes of his Decade anthology. “It’s ironic that I capitalized on the death of these American students. Probably the biggest lesson ever learned at an American place of learning.”