Madonna Sent Down Under. Banned From TX Radio Station 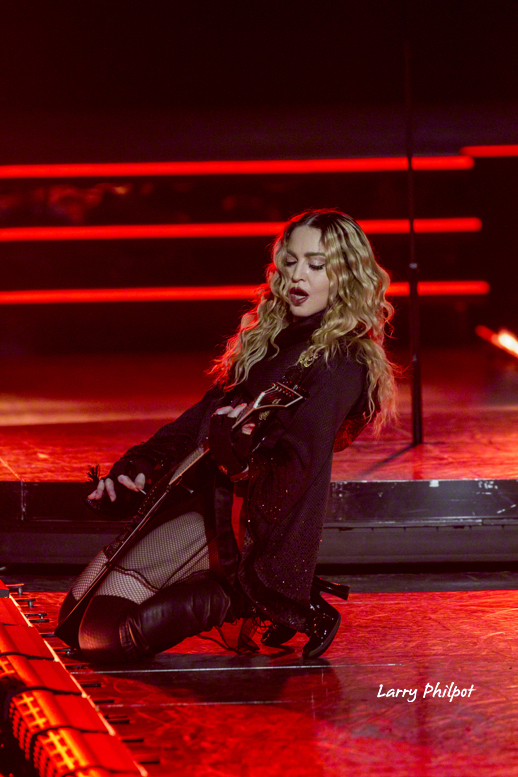 Yesterday, a small, foreign owned radio station broadcasting to Texarkana, Texas, Hope, Arkansas, and New Boston, Texas announced its plan to ban Madonna from its airwaves. They posted a media release on their Facebook page citing Madonna’s contentious speech at the Women’s March in Washington last Saturday as the reason.

Texarkana’s Classic Hits station – HITS 105 is taking all Madonna songs off the air in the station’s local programming indefinitely following the singer’s comments over the weekend.
In addition to ‘F-bombs’ in her speech, Madonna talked about how upset the election results had made her including her now infamous, “Yes, I’m angry. Yes, I am outraged. Yes, I have thought an awful lot about blowing up the White House,” comments.
General Manager of HITS 105, Terry Thomas, says “banning all Madonna songs at HITS 105 is not a matter of politics, it’s a matter of patriotism. It just feels wrong to us to be playing Madonna songs and paying her royalties when the artist has shown un-American sentiments. If all stations playing Madonna took their lead from us, that would send a powerful economic message to Madonna.”

Madonna posted a statement to her Instagram insisting she “spoke metaphorically” and had been “taken wildly out of context.”

“I don’t agree with what you say but I will defend to the death your right to say it.” ~Evelyn Beatrice Hall

Did you notice, at the beginning of the article – we mentioned foreign owned? This may not seem like a big deal, but it is. The Communications Act of 1934 limits the stake a foreign investor can hold in a U.S. broadcast station. The Act was intended to limit the potential for foreign powers to control the American public’s access to information. It takes special attention, attorney’s, and lots of money to make deals like this happen. You know — all that fake news “they” say the Russians are supplying us with??? Yep – that’s what “they” are talking about in 1934, and what “they” are still talking about today. #FakeNews

Since this is a matter of “Patriotism” – we began to wonder; who is the patriot in this instance, and who is not?

Frontier Media states that transferring ownership would serve the public interest because it would further the goal of promoting broadcast service to Alaska, which is generally an undeserved area, and to the small communities of Texarkana, Texas, Hope, Arkansas, and New Boston, Texas. However; if you’re a Madonna fan – then you are going be decidedly under-served so, suck it up buttercup.

Frontier Media maintains that Australian ownership poses no national security or other threat to the United States, given the fact that Australia is one of our most steadfast allies and shares many of our cultural traditions, but Madonna – that rowdy bra-burner – well… she’s obviously subversive and definitely deserves banning. (This must be the same argument Rupert Murdoch’s attorneys used when he was starting FOX Broadcasting Company…)

Frontier Media stated that granting its petition would further the Commission’s goals of encouraging foreign investment and ownership diversity in U.S. broadcast stations. To us, they don’t appear concerned about encouraging Madonna’s right to be diverse, the diversity of their playlists, the diversity of their audience, or the 1st Amendment. We’ve never listened to Hit 105, but they tout their station as “classic” — which we love, however, if they start distinguishing between the patriotic and not so patriotic artists on their playlists, we predict that soon, they will be playing Toby Keith and the Star Spangled Banner all day. 🙂

(Black Mirror has been on repeat, so naturally, everything seems to be reminiscent of scenes from the Netflix hit. ~ Are any of you experiencing this same feeling?~ )

Why would a radio station (owned by citizens from another country) really care about American patriotism?

WHATever Madonna says in this country (regardless of context, profanity, or blasphemy) takes a back seat to her right to say it. The idea of banning books, burning records, or boycotting things like Rainbow Doritos leaves a bad taste in our mouth and reminds us of the 1940’s. The march toward a controlled media is not new, but the cat is out of the bag and the only way to stuff it back in is to pull the plug. As lovers of this platform and all things artistic, beautiful and thought provoking, we hope to never see the day radio stations quit broadcasting or the internet is shut off (like in Syria). If we are lucky,  the internet will continue to function much as it does today and you can decide — as a free thinking citizen of the planet — whether to listen to Madonna or turn her off.