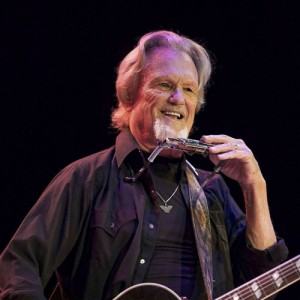 American singer, songwriter, musician and actor Kristoffer Kristofferson is 80 years old today. (June 22) . Kris has written and recorded a deep library of songs, including the hit songs “Me and Bobby McGee,” “For the Good Times,” “Sunday Mornin’ Comin’ Down” and “Help Me Make It Through the Night.” Kristofferson composed his own songs and collaborated with Nashville songwriters such as Shel Silverstein. In 1985, Kristofferson joined fellow country artists Waylon Jennings,Willie Nelson and Johnny Cash in forming the country music supergroup The Highwaymen. In 2004, Kristofferson was inducted into the Country Music Hall of Fame. He is also known for his starring roles in Alice Doesn’t Live Here Anymore and A Star Is Born, for which he won a Golden Globe Award for Best Actor. An accomplished singer in his own right, much like Willie Nelson and Billy Joe Shaver, Kristofferson’s songs that were covered by other people became significantly bigger hits that his own versions. Enjoy the few samples from YouTube, included in this commentary. (Featured image courtesy of contributing photographer Craig Weiglein, of Mansion Hill Studios in Ohio.)

Kristofferson earned a Rhodes Scholarship to Oxford University, where he studied at Merton College. While at Oxford, he began writing songs. With the help of his manager, Larry Parnes, he recorded for Top Rank Records under the name Kris Carson. Parnes was working to sell Kristofferson as “a Yank at Oxford” to the British public.  Kristofferson was willing to accept that promotional approach if it helped his singing career, which he hoped would enable him to progress towards his goal of becoming a novelist. This early phase of his music career was unsuccessful. In 1960, Kristofferson graduated with a master’s degree in English literature. He joined the Army, and after his discharge at the rank of Captain in 1965, moved to Nashville.

He got a job sweeping floors at Columbia Recording Studios in Nashville. He met June Carter there and asked her to give Johnny Cash a tape of his. She did, but Johnny put it in a large pile with others. Weeks later, Kristofferson landed a helicopter in Cash’s front yard, gaining his full attention. [Note: In a later interview, Kristofferson maintained Cash was not at home when he landed the helicopter. The story about Kristofferson having a beer in one hand and some songs in the other is a fable.]  Cash decided to record “Sunday Mornin’ Comin’ Down” and that year Kristofferson won songwriter of the year at the country music awards.

Kristofferson’s compositions became in high demand. Ray Price (“For the Good Times”), Waylon Jennings (“The Taker”), Bobby Bare (“Come Sundown”), Johnny Cash (“Sunday Morning Coming Down”), and Sammi Smith (“Help Me Make It Through the Night”) all recorded successful versions of his songs in the early 1970s. “For the Good Times” (Ray Price) won “Song of the Year” in 1970 from the Academy of Country Music, while “Sunday Morning Coming Down” (Johnny Cash) won the same award from the Academy’s rival, the Country Music Association, in the same year. This is the only time an individual received the same award from these two organizations in the same year for different songs.

After 1973, for the next few years, Kristofferson focused on acting. He appeared in Blume in Love, and Pat Garrett and Billy the Kid (directed by Sam Peckinpah). He continued acting, in Sam Peckinpah’s Bring Me the Head of Alfredo Garcia,Convoy, Alice Doesn’t Live Here Anymore, Vigilante Force, The Sailor Who Fell from Grace with the Sea, and Flashpoint in 1984. At the peak of his box-office power, Kristofferson turned down William Friedkin’s Sorcerer (1977), the romantic war film Hanover Street and the first Rambo-installment, First Blood.

Kristofferson’s next film was Heaven’s Gate. Despite being a phenomenal industry-changing failure at the time, the film gained critical recognition in subsequent years. In 1986, he starred in The Last Days of Frank and Jesse James with Johnny Cash. In 1989, he was the male lead in the film Millennium with Cheryl Ladd. In 1996, he earned a supporting role as Charlie Wade, a corrupt South Texas sheriff in John Sayles’ Lone Star, a film nominated for an Oscar for Best Screenplay. In 1998, he took a role in the film Blade, playing alongside Wesley Snipes as Blade’s mentor Abraham Whistler. He reprised the role in Blade II (2002) and again in Blade: Trinity (2004). In 1999, he co-starred with Mel Gibson in Payback. In 2013, Kristofferson co-starred in The Motel Life, as well as “Angels Sing” with Willie Nelson and Lyle Lovett.

The standout performance was A Star is Born, and while makeup artists made Barbra Streisand nothing short of stunning, Kristofferson received a Golden Globe Award for Best Actor.

Kristofferson and Willie Nelson had crossed paths several times and were good friends.  Music from Songwriter (an album of duets between Nelson and Kristofferson) was a massive country success. Nelson and Kristofferson continued their partnership, and added Waylon Jennings and Johnny Cash to form the supergroup The Highwaymen. Their first album, Highwayman, was a huge success, and the supergroup continued working together for a time. The single from the album Highwayman, also titled “Highwayman,” was awarded the ACM’s single of the year in 1985.