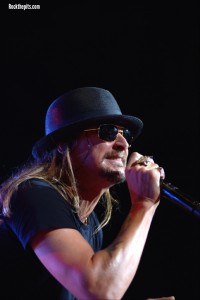 Kid Rock has gone completely against the grain of the concert industry by touring behind the idea that a cheap ticket makes more money than an expensive one in the long run. While the average ticket price across the industry is almost $80, Rock has decided that $20 is more in range with what he’d like to see his fans pay.

Rock got promoter LiveNation to buy in after he agreed to revenue share 50/50 on the proceeds, rather than ask for a guarantee like most artists, and so far it’s paid off, as every show has sold out and multiple nights have been booked at the same venues. And it gets better than just the low ticket price for fans.

Now there are a thousand premium tickets available at higher prices, but they’re also being sold directly to fans to keep the scalpers at bay.

This is a great idea because not only does it expose Rock to potential new fans who can afford to check him out because of the cheap prices, but it reenergizes his fan base as well. There’s nothing like seeing a great live show to get your fans talking, and buying.

Not wanting to sound too old school here, once upon a time concerts were cheap enough that you could go several times a week and still have money left over. That exposed you to music that you’d have never seen otherwise, and allowed you to make a musical connection in the best way possible – from a live event. Unfortunately, as the prices began to soar, that several times a week became several times a month to today’s once or twice a year. There’s no way to gain new fans since the artists are only playing to their hard core fan base.

Kid Rock’s lower prices have already caused a stir in the business, as Bon Jovi has added a $19.50 ticket to the current tour and other acts are considering something similar as well. This is a healthy trend and good for everyone involved, at least as long as the venues are full. Let’s hope it continues.

Have you been to one of these? Would you go to one?  Please feel free to add your comments below.