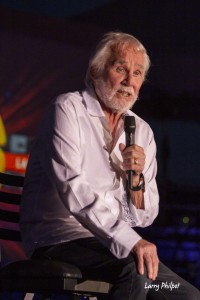 Last night, Hoosier Park’s Summer Concert Series featured the legendary Kenny Rogers with his special guest and longtime friend, Grammy nominated Linda Davis. The temperature had dropped from the steamy 90s to a warm, yet comfortable temperature as Rogers slowly walked onto the stage to thunderous applause from the capacity crowd.

Gracious, humble and soft spoken backstage, his powerful voice which has put him in the Country Music Hall of fame was unmistakable. Explaining that he’d recently had a knee replacement, much of his concert was performed from a single chair, but it seems to make the performance a bit more slowed and much more intimate, revealing a remarkable storyteller, and a sampling of music from the 1930s to present. 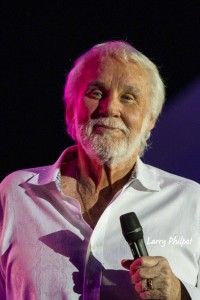 Rogers was humorous, and as this is his final tour, reflective on his career and grateful for his opportunities and to people who had made it all possible. There were three video screens, and album covers and old portraits of musicians such as Jimmy Rogers, Conway Twitty, Dottie West, Minnie Pearl, Ernest Tubb, Ray Price, Smokey Robinson, Lionel Richie and Elvis flashed to the delight of the audience, as Kenny stated that each of these performers had made his career, and all the music that we now hear, possible.

Incredibly, Rogers has charted a record within each of the last seven decades (’50s, ’60s, ’70s, ’80s, ’90s, 2000’s, 2010’s), while sending 24 songs to the No. 1 spot of the charts. While his vast library of hits is so deep, he could have done a three hour show and barely touched the surface, last night, he was a storyteller, delighting the crowd. He spoke of opportunities, rising from the projects of Houston, practicing tennis for eight hours a day for fifteen years, becoming nationally ranked until his legs couldn’t take it 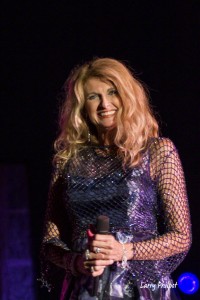 anymore, and friendship. Rogers spoke highly of the women who had become good friends and had joined him in many duets that had produced many beautiful, well known songs. A handful of those duets were performed with his friend and current touring companion Ms. Linda Davis joining him onstage.

Grammy winning singer/songwriter Linda Davis is a firecracker, and is also a consummate entertainer, inspirational motivator, and devoted wife,  and mother of Lady Antebellum’s Hillary Scott. She has built a reputation as a world-class entertainer and is considered one of the best female vocalists in the business by some of her most well known peers.  Through the years, Davis has played to sold-out crowds with the likes of Garth Brooks, George Strait, Reba McEntire, as well as Rogers. Their onstage back and forth teasing just added to the feel of listening to an old friend.

Rogers performed many of his hits, and clips from his movies played on the screens in the background. He stated that he was grateful to get new opportunities, and joked that he wasn’t really an actor, and had eleven movies to prove it. His voice not as versatile as it was decades before, he still belted out old favorites with both power and feeling. After 60 years in entertainment, he presented a very moving video clip of the things that he would miss most. 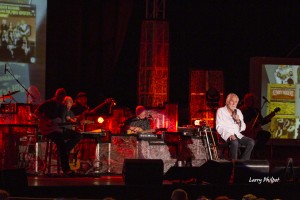 Though the crowd was filled with people of all ages, the slower, more intimate pace of the show and venue security quickly addressing anyone approaching the stage with a cellphone, urging them back to their seats, the crowd was very well mannered. Except for standing ovations, the audience stayed seated, enabling everyone to thoroughly enjoy this concert without having people standing in front of them.

The highlight of the show was Rogers’ stunning performance of Lionel Richie’s “Lady”, as seen below.  Grade: A