Jutaun Releases Thought-Provoking New Video “Who Am I” 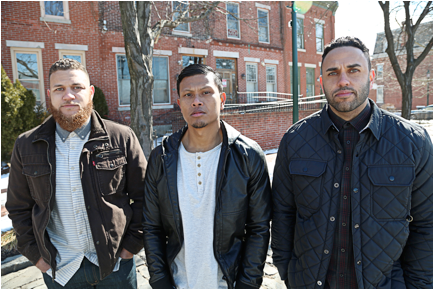 “Who Am I,” a video from New Jersey based Jutaun, asks that question throughout an artfully edited video which makes you take a hard look at your individual biases and ingrained expectations. Director Guy Davies takes the haunting tune and weaves a story of inner city life into seven minutes of apprehensiveness, where nothing is as it seems.

Jutaun has released “Who Am I” as the first single off their soon-to-be-released debut EP Back To Life, which is set to drop on June 8th 2015. “Who Am I” features clear harmonies, a melody with enough tempo changes to keep the ride interesting, and lyrics that will make you think… isn’t that a refreshing concept?

The band was formed by brothers Jake Evans (percussion & vocals), Jamie Evans (guitar & vocals), and Samoeun Cheng (vocals). Growing up in a musical family, the Evans brothers were exposed to all types of music, and took influences from many of them. Cheng, who eventually ended up in South Jersey by way of Cambodia, Thailand, San Francisco and Memphis, brings along his own musical influences. Together their sound is anything but predictable and more than a little difficult to categorize into one genre.

Named one of the “30 NJ Bands You Must Hear in 2015” by NJ.com, Jutaun appeared at this year’s SXSW and are hitting the radio station circuit promoting their upcoming release.

Watch the video and look at real life a little differently.