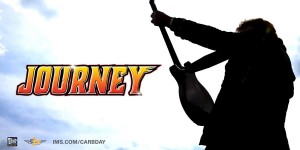 INDIANAPOLIS, Tuesday, November 24, 2015 – The historic 2016 Indianapolis 500 weekend, culminating with the 100th Running of the Greatest Spectacle in Racing, will kick off on Friday, May 27, with the legendary rock band Journey on Miller Lite Carb Day along with special guest Neal “Vortex” Schon. General admission tickets are available for purchase now at www.IMS.com/carbday.
Journey has entertained fans across the globe for more than four decades with a catalog full of hit albums and chart-topping singles that remain in heavy rotation on the radio today. For their upcoming tour, Neal Schon (founding member and lead guitarist), original member Ross Valory (bass), and longtime members Jonathan Cain (keyboardist) and Arnel Pineda (lead singer), are welcoming virtuoso drummer Steve Smith back into Journey, marking the first time he will perform with the band since 1998.

The thrilling concert is part of Miller Lite Carb Day. General admission tickets are $30 and fans wanting the closest access to the stage can purchase a $10 upgrade. Prices will increase so fans are encouraged to buy now and save. VIP viewing options and packages will be announced at a later date.

Miller Lite Carb Day will again feature great action on and off the track. The field for the 100th Running of the Indianapolis 500 will have one final hour of practice to prepare for the race, and top teams will participate in the annual TAG Heuer Pit Stop Challenge. Also, stars of the Indy Lights Presented by Cooper Tires will compete in the Freedom 100 race. Journey will take the stage following those activities.

The 100th Running of the Indianapolis 500 will be held on Sunday, May 29. Head to www.IndianapolisMotorSpeedway.com for more information on the Month or May and the 100th Running.
About Journey
Journey is one of the most popular American rock bands of all time, creating some of the best-known songs in modern music, with iconic hits such as “Lovin, Touchin’, Squeezin’,” “Faithfully,” “Lights,” “Any Way You Want It,” “Stone In Love,”  “Who’s Crying Now,” “Wheel In The Sky,” “Open Arms,”  “Separate Ways,” “Only the Young,” “Be Good to Yourself,” and the seminal “Don’t Stop Believin’,” which is the top-selling digital catalog track in history. Since its formation in 1973 in San Francisco, Journey has sold 80 million albums worldwide, earning 19 Top 40 singles and 25 gold, platinum and multi-platinum albums since. The Greatest Hits album is certified 15 times-Platinum, bringing Journey into the elite club of Diamond-certified holders.  In 2007, Neal Schon discovered Arnel Pineda on YouTube and succeeded in making Pineda the new lead singer. Two albums and three major tours later, Journey has toured four continents and performed for nearly three million fans, earning the group Billboard’s prestigious “Legend of Live Award.” They received a star on the Hollywood Walk of Fame and VH1 has named the group one of the top 100 artists of all time.