Jonny Lang comes to Bourbon and Beyond 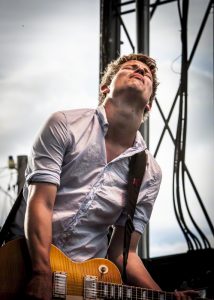 The inaugural weekend festival in Louisville boasts an extremely impressive lineup, and a “must see” is Jonny Lang, who has been performing as a frontman since he was 12 years old.  Lang is one of a small group of modern guitar prodigies, among the likes of Derek Trucks and Kenny Wayne Shepherd. At 15, Jonny Lang made a blues album, 1997’s “Lie to Me,” which went platinum and hit No. 1 on Billboard’s New Artist chart. At 17 he made another, “Wander This World,” which earned a Grammy nomination. Today, at age 32, he is one of the most emotion packed performers in the business.  September 23-24.  Tickets are still available,  http://bourbonandbeyond.com/