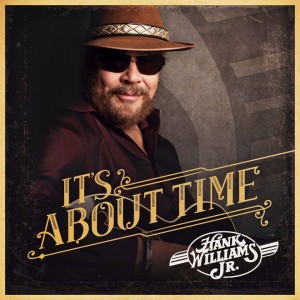 Indianapolis, IN —– Country and southern rock music legend, Hank Williams Jr., and 2015’s most critically acclaimed country artist, Chris Stapleton, will join up for a co-headlining summer tour. The tour will appear at Klipsch Music Center in Noblesville, Indiana on Friday, August 26, 2016.

Marking 52 years since his first album in 1964, Hank Williams Jr. released IT’S ABOUT TIME (Nash Icon Records) on January 15. In addition to the history-making “Are You Ready for the Country,” the project includes new tunes such as “Dress Like an Icon,” “Just Call Me Hank,” “It’s About Time,” and “The Party’s On” as well as re-recorded versions of classics “Mental Revenge” and “Born to Boogie” with Brantley Gilbert, Justin Moore and Brad Paisley on guitar. Hank Jr.’s extremely impressive resume has spawned 70 million albums sold worldwide, six PLATINUM albums, 20 GOLD albums, 13 No. 1 albums and 10 No. 1 singles. Hank Jr. has been named ACM Entertainer of the Year, CMA Entertainer of the Year and BMI Icon in addition to winning a GRAMMY and being inducted into the Nashville Songwriters Hall of Fame. In October 1982, Williams had nine albums on the Billboard music charts at the same time, a feat unequaled by any other living artist. In 1987, Hank won the first of five straight Entertainer of the Year awards voted to him by his peers, and won his first ever Grammy. As a touring artist, Hank was a pioneer in bringing arena rock production values to country music, and he remains one of the most consistent ticket sellers in music, period, as generation after generation gets turned on to one of the most dynamic live performers ever to take the stage.

Chris Stapleton boldly introduced himself to the public at-large in 2015 with the release of his breakthrough debut album, Traveller. Released in May on Mercury Records Nashville, Traveller initially debuted at No. 2 on the Billboard Country Albums chart with more than 27,000 albums sold, making it one of the best-selling first weeks by a debut country artist in 2015. Following a historic turn on the CMA Awards—Stapleton is the first artist to win Album of the Year, Male Vocalist of the Year and New Artist of the Year at the same awards—Traveller became the first album to re-enter the Billboard 200 all-genre album chart at No. 1, where it stayed for two straight weeks. Stapleton capped off the year with four nominations at the 58th Annual Grammy Awards—Album of the Year, Best Country Album, Best Country Song (“Traveller”) and Best Country Solo Performance (“Traveller”).

Tickets will go on sale tomorrow, April 22 and can be purchased through Ticketmaster outlets, Ticketmaster.com or charge- by-phone at 1-800-745-3000, as well as through venue ticketing partners.