The Grammys Pre-Telecast or What The Awards Show Should Be 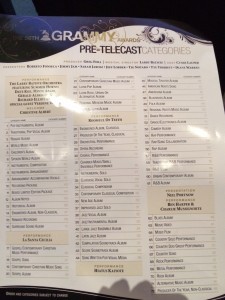 For all the glitz, glamour and weirdness that is the Grammy telecast, the Pre-Telecast which is only seen online, is the polar opposite. While the prime time event focuses on the spectacle, forced pairings of musicians, and awards for only the most hyped songs of the year, the Pre-Telecast showcases the awards for categories where actual musicians let their music speak for itself. The show also features performances by some kick-ass artists who blow the audience away with their talent, all without the need for pyrotechnics, laser shows or lack of clothing.

It’s very sad The Grammys feel that Rock, Blues, Folk, Americana, Bluegrass, New Age, Classical, Reggae, Children’s, Gospel, Latin, Jazz, and many other genres are unworthy to be shown in prime time. Actually it’s disgraceful.  So instead, they start the show with Beyonce’s ass. 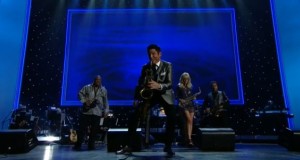 It’s a shame the first performers on the Pre-Telecast weren’t allowed on regular TV.  You want to see the way to open a music awards show? Go to Grammy.com and click on the link for the Pre-Telecast and watch The Larry Batiste Orchestra featuring Summer Horns: Dave Koz, Mindi Abair, Gerald Albright, Richard Elliot and guest Verdine White. Insanely good.

After the first sixteen awards were handed out, it was time for more fabulous musicians to take the stage. Latin alternative band La Santa Cecilia showed how really good music transcends any pre-conceived thoughts of what a specific genre should be. Oh yeah, and then they won the Grammy for their category.

I was not prepared for the next musical act to perform. Roomful of Teeth is a choral ensemble that will just blow you away. Go to 1:09 on the telecast, turn up the volume and watch what can be achieved in a vocal performance without the help of overdubbing or autotune. To have been sitting twenty feet away from this was jaw dropping. Host Cyndi Lauper said it best after the performance, “It was stunning.” And it was. Oh yeah, and they won a Grammy too. 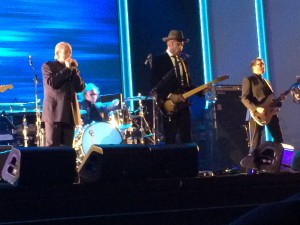 Australian R&B band Hiatus Kaiyote not only pushes the envelope for R&B, they shred it into pieces. Funky, smooth and tight. Go to 1:51 of the telecast to see what I mean.  The final performers on the Pre-Telecast were Ben Harper and Charlie Musselwhite. 2:30 on the counter, blues baby, that’s all you need. They won their Grammy too.

The Grammy Awards mark excellence in music. The prime time awards show does not.  Unfortunately, the need for spectacle overshadows the purity of the music. For my money, I’ll take the music, and the Pre-Telecast with the awards that recognize categories with a rich musical heritage.

Without autotune, overdubbing, or Beyonce’s ass.