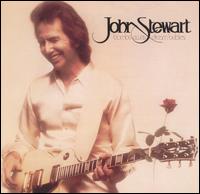 John Stewart was a member of the Kingston Trio in the early 60s and wrote the Monkees’ #1 hit, “Daydream Believer.” He came from out of nowhere and scored a Top 5 hit in the summer of 1979 with “Gold.” He wrote “Gold” shortly after leaving the trio and teaming up with a pre-famous John Denver.

Stewart was not a name most people were familiar with, especially pop music fans. He became the official musician of the Democratic party during 1968, which involved traveling with Senator Robert Kennedy during his Presidential campaign. He identified with the folk singers of the time and recorded solid but mostly unsuccessful LPs throughout the 70s.

His fate changed the day he hooked up with Lindsey Buckingham & Stevie Nicks. They were riding a ridiculous rock star high from the Fleetwood Mac LP, Rumours. Anything of interest to a Mac member was hot and just about anything they touched turned to…. yes, gold.

This is not to say that John Stewart didn’t write a great song to begin with. It’s still getting airplay on classic rock radio today.  The narrative is easy to follow and captures the surreal feeling of driving at night through the California lights. Stewart pops his guitar in the car, excited for that next gig and speeds off into the dark.

Lindsey Buckingham and Stevie Nicks were the catalysts for its commercial success, as well as contributors to the overall sound of the album. Buckingham’s guitar work is understated by his usual standards but integral to the sound achieved while his vocals are a solid counterpoint to Stewart’s rugged baritone. Nick’s’ recognizable vocals on harmony adds authenticity to the song and takes it to another level.

It’s a very basic song with simple lyrics, but the production gives it a supernatural feeling. There’s nothing fancy going on, just an electric piano, snare & bass drum, electric guitar strumming in the distance. The arrangement is sparse and feels like the song is struggling to emerge from the shadows, but what does finally emerge is gold.

Stewart died on January 19, 2008 from a massive stroke. In a letter posted on the Kingston Trio site, his close friend Tom Delisle wrote: “John Stewart leaves a compilation of musical excellence unparalleled in his time. He recorded over 45 solo albums following his seven years in the Kingston Trio, 1961-67. He worked all the way up to the time of his death, having recently completed his latest as-yet untitled album. It is estimated that he wrote more than 600 unique and highly personal songs, many of them constituting a modern musical history of his beloved America.”

Ironically, even though “Gold” hit #5 and his LP, Bombs Away Dream Babies hit the Top 10, neither turned to gold. As a consolation, he was mistaken for Garry Shandling once in a while. Stevie Nicks, however, has never been mistaken for anyone else.