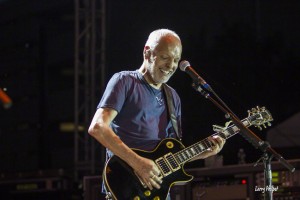 I really cannot understand why it is so difficult for some people to arrive at any event on time or even a little early.  Do they understand how disrespectful it is to the performer, not to mention the several people whose faces you stick your rear end in while plowing across them to get to your fabulous seat because you do not know that the proper etiquette is to actually face them when you enter the row and make your way to your seat? But my job is not to teach you what you should have learned from your parents or the internet, so I digress.  However, by arriving late, you might miss super important announcements from the venue such as, “There will be no video recording or flash photography of tonight’s performance allowed!” Followed by the statement, “However, you may take photographs without use of a flash.”  Now this all plays a very important part in our little feature, so wait for it.  Still, a few chose to arrive late and made their way to their seats, with drinks in hand.  And so it begins….

Anyone who has ever been to the Palladium in Carmel knows it is a great venue acoustically.  However, for rock-n-roll shows, it does take a little tweaking.  Peter Frampton came on stage in great form, and forgive this writer for not remembering what his first number was, but as you will later learn from the night’s events, I lost track of the set list.  I was not there originally to review this show, I was just there to watch the ever consummate performer put on an amazing show as usual.  However, the first number was a little rocky as the sound needed to be ironed out a bit, although I do not think most of the crowd realized this.  He started with a couple of newer songs, although I did not recognize them as being from his latest album, Hummingbird in a Box, which I was actually anxious to hear.  If you don’t know, this album was written and inspired with the Cincinnati Ballet in mind, and you can actually hear that influence in the guitar pieces.  They did indeed correct the sound issue and Peter began to look and sound like the great player he is.  And then it started.

Ironically, Peter’s tour is called Guitar Circus, however, this is not one of the technical stops on that tour.  That tour includes other musicians with him.  However, the events that followed turned this show into a circus in every unfortunate sense of the word.  Remember I mentioned late people?  There was one couple who came in and sat in the front row, center. I don’t know whether they were an actual “couple” or how to describe their actual relationship status as other than dumb and dumber.  They began taking flash pictures and recording.  He with his phone; she with her camera.  At first, Peter kept gesturing to them saying “No, don’t do that.  Stop!”  But they just did not get the hint.  He was frantically looking for security, but they were nowhere nearby.  They male from the front row was even stupid enough to back up to the stage and get the girl to take a “selfie” of him with Peter.  Peter quickly turned around and turned his back to the audience and played that way for several moments.  Again, they did not take the hint.  They just kept blissfully doing what they wanted with no intervention from security.  Now, let me remind you here that this is a Peter Frampton concert, so the average age of the concert goer was probably over 40 years old.  To be sure, these two audience members were not in their 20s and knew very well what they were doing.  Finally, a lady in the second row had the courage to tell the woman that she could not take flash pictures and that she needed to stop.  Well, our little picture taker stomped off in a huff, but only as far as the second row.  And she stopped taking pictures…for a bit.

Once we were able to settle in to some music, and a few jokes from Peter, such as thanking us all for traveling to London to see him perform at The Albert Hall – his reference to the Palladium, he began playing some old songs like (I’ll Give You) Money  – at which point he treated us to what seemed like a 10 minute guitar duet with band mate Rob Arthur.  This was a testament to his true skills as a guitar master.  Sadly, Peter’s voice was a little hoarse throughout the night, but not that it seem to affect any song in any way.  Peter did play Heart to My Chest from the new album.  He played a couple of other classics and then it came time for Do You Feel Like We Do. Trouble began to brew.  Frampton played the first of it and then it came time for the part with the voice box.  For those who don’t know, the mic with the voice box was set up dead center stage, right in front of our picture taking friends.  Peter then jokingly said several times, “I don’t feel like doing it tonight.”  “I really don’t feel like doing it.”  Now, what the crowd was taking as a joke, those of us sitting there witnessing the whole night’s fiasco could see the actual frustration in his face growing.  So, he quickly did one line, even turned to the side so he wasn’t facing them.

As he neared the end of the song, you could see the absolute look of desperation and frustration on Peter’s face.  I have never seen an artist so upset before.  OK, maybe once, but that one stormed off the stage.  At his breaking point, and the guy in the front row unrelenting – apparently with no self control considering he’s already flipped Peter off and turned around and called the rest of the audience a bunch of deadbeats – Peter ends the song, walks over and with a huge smile on his face bends down and says, “Hey can I see that? Can I see the photos you’ve been taking?” The guy hands him his phone and Peter stands up, spins, and flings for the rafters!  Yes! The phone went flying to the back of the stage and we all erupted in cheers!  With years of experience playing guitar, we just knew he had a great arm!

As someone who has been to more Frampton concerts to count, and I have photographed many of them (with permission and the proper credentials, thank you), I know for a fact that Peter Frampton is one of the most selfless and gracious performers you will ever meet.  He is genuinely a very nice guy on and off stage.  He absolutely loves what he is doing and it shows in every concert he does.  He always gives 100%.  He loves his work! But what I saw tonight was someone who deeply regretted going into the office on this day because of two jerks with money and an attitude of privilege who did not know how to behave at a concert.  This was not Frampton’s fault.  He wasn’t allowed to perform to his fullest.  He was tethered to stage left (the right if you are facing it) because of two camera happy nimrods and a facility whose policy clearly indicates a hands-off approach.  You don’t go to a concert to disrespect the performer or the other concert goers.  Frampton put on one hell of a show as he always does.  His guitar work was amazing and sadly, was overshadowed by two jerks who felt it was their show.   Who can understand an establishment whose policy it is to “not go into the crowd unless the tour manager tells us specifically to do so.”  You announced the “No flash photography policy and you could see the flashes going off.  Therefore, doesn’t that constitute a need to correct the situation?  Was Peter supposed to completely stop his show and yell (even after you were notified by several people) “Hey, come get these bloody arses away from me!” ?

I truly hope this does not sour Mr. Frampton’s opinion of touring in Indiana.  However, I have a feeling that is the last time we will see him here after last night’s display from the crowd.  My only question to Peter is, why did you wait so long to take the phone????  Row 3 was plotting by at least song 4. 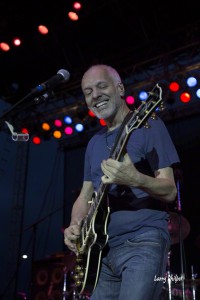 Sadly, the story does not end there.  The woman actually tried to take a flash picture of the band as they were taking their bows.  Incredibly, she even had the nerve to try to wait for him to get an autograph and photo.  To add to this fiasco, as Frampton moved quickly to his bus and the bus began pulling away, yet another 40+ year old woman started yelling “Boo Peter!! BOOOOOOO for not coming out here!  Boooooo!!”  Yeah, that is really going to make him sign your autograph, lady.  Grow up people!!