A Love Letter to Fleetwood Mac 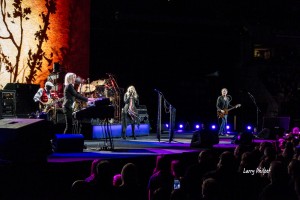 Flying back from Omaha, Nebraska after catching Fleetwood Mac at the Pinnacle Peak Arena in Lincoln Saturday night, my iPhone is in airplane mode and the playlist is set only to Fleetwood Mac (wash, rinse, and repeat). For a girl from the desert Southwest, Omaha, in the middle of January, may not seem like the most logical place to catch The Mac; however, this is not an ordinary band and these were not ordinary seats. For me, a true fan, to experience a super-group like Fleetwood Mac up close and personal was the event of a lifetime. Fleetwood Mac hasn’t lost their passion in the 40 years they’ve been pounding out drum beats, singing heartfelt lyrics, playing brilliant guitar licks, and embracing perfect harmonies. If anything, the closeness and comradery between the band members seems deeper and stronger today than any time before. 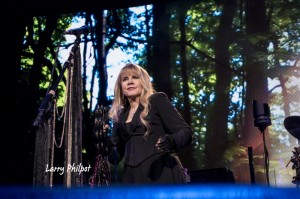 The lights dimmed after a stage hand placed Stevie Nicks’s microphone, adorned with scarves and beads, center stage and the crowd (myself included) went wild when the ominous strands of The Chain began to echo through the arena. My head is still reverberating with the music of the Mac 48 hours later, and my entire body is rebelling from the amount of dancing and jumping their music inspired. I can tell you unequivocally that the 40’s are NOT the new 20’s, but that shouldn’t stop anyone from taking an unforgettable walk down memory lane with Fleetwood Mac. I almost feel like a different person after seeing this show, somehow older, and wiser overnight. I jokingly said this concert was the equivalent of attending church, and after seeing the spiritual connection Stevie Nicks makes with the crowd and the music, that description is not far off. 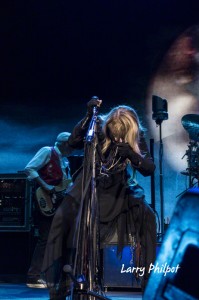 Fleetwood Mac’s music spans generations and touches people of all ages. My connection to Fleetwood Mac started in the 70’s. During the summer of 1977, the “Rumors” album played continuously in my world. For most of my childhood, and continuing through my adult life — the ethereal, genius guitar work of Lindsey Buckingham, the beautiful, heartfelt, and oftentimes poignant lyrics of Stevie Nicks and the pounding heartbeat of Mic Fleetwood’s drum kit sound tracked my life. Every song, every note, every lyric, every guitar riff elicits a memory of a person, a feeling, or a time period. Although I needed no extra help, this particular show solidified my love and adoration for Fleetwood Mac, even though they had to cut it short due to Mic Fleetwood’s bout with the flu. Their drum tech, Steve Croes, picked up the sticks and gave us a rousing rendition of “Go Your Own Way” that transitioned into Christine McVie’s closing the show with a beautiful rendition of “Songbird,” so Mic could literally get on the road to recovery. 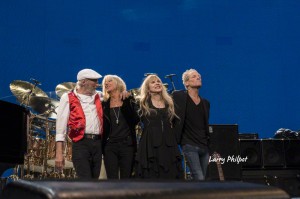 This Fleetwood Mac show is the best concert I have ever seen, and I’m no slouch in the concert department. Nothing can, or will compare to seeing the Mac take the stage in Lincoln, NE. I’m not sure anyone else had the same experience I had, but for me, this was almost like receiving a spiritual communion with an iconic group of musicians. Do NOT Miss this show if you are lucky enough to grab tickets. Thank You Fleetwood Mac for performing and giving the fans a night to remember. We here at Onstage Magazine hope you love the fabulous shots we were able to capture of this performance.  You are beautiful – every last one of you. xoxox