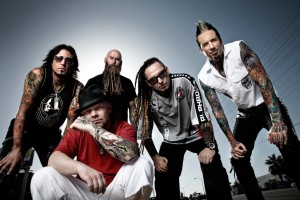 July 30, 2013 – Las Vegas, NV — Today, acclaimed hard rock band, Five Finger Death Punch releases their highly anticipated The Wrong Side Of Heaven And The Righteous Side Of Hell Volume 1 via Prospect Park in North America and via Eleven Seven in all other territories (out in Europe since late last week, Japan release on 7/31, Australia on 8/02). The album follows three prior RIAA gold certified releases for sales exceeding 500,000 copies: The Way of The Fist (2007), War Is The Answer (2009) and American Capitalist (2011). Cumulative single sales have now exceeded over 4.5 million.

Five Finger Death Punch’s brand new single, “Lift Me Up” (featuring Rob Halford of Judas Priest), is currently #1 on the Active Rock charts for a second consecutive week. This is the eleventh consecutive Top 10 radio hit for Five Finger Death Punch, and the band’s second #1 track following “Coming Down” achieving the milestone in 2012. Guitarist Zoltan Bathory shares, “It feels like the perfect storm. With the single ‘Lift Me Up’ (feat. Rob Halford of Judas Priest) being #1 during the week of the new record’s release date, we are feeling a lot of love, a lot of support and a lot of anticipation from everyone. The band is equally excited because this is our best work to date and we can’t wait for the fans to hear it.”

Alongside Rob Halford of Judas Priest, special guests on the new album include: rapper Tech N9ne on an unexpected cover of LL Cool J’s “Mama Said Knock You Out,” In This Moment’s Maria Brink on “Anywhere But Here,” Jamey Jasta from Hatebreed on “Dot Your Eyes And Cross Your Teeth,” and Max Cavalera of Soulfly on “I.M. Sin.”  The album has been released in multiple configurations including a deluxe edition featuring a bonus 15 track live CD, PURGATORY [Tales From The Pit], and is accompanied by a redeemable limited edition t-shirt with the physical pressing only. Via the band’s web store, a collectible limited edition box set featuring a 5FDP lunch box, the deluxe version of the album with the bonus live CD, and assorted collectible items is available here http://bit.ly/13pNY28

The band is entering their final week co-headlining the 2013 Rockstar Energy Drink Mayhem Festival alongside Rob Zombie. THE WRONG SIDE OF HEAVEN North American headline tour will follow, kicking off September 15th at the Aftershock Festival in Sacramento. Escape The Fate and Miss May I support, with Gemini Syndrome opening the show. Fans ordering the album from the official store today will receive an exclusive code to access tickets to the US Fall tour dates before the general public: http://bit.ly/1c5xy2N

A tour announcement can be viewed here: http://youtu.be/YbKCF0HmKIs