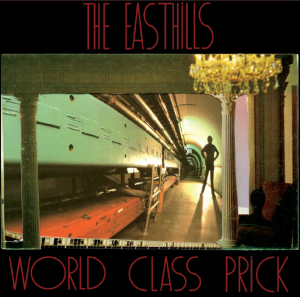 INDIANAPOLIS, IN (April 11, 2014) The Easthills will release a 4-song EP World Class Prick this Tuesday, April 15 via the band’s official website at www.theeasthills.com and online at CD Baby, iTunes, Amazon and other digital sellers.

The Easthills new EP follows their 2013 celebrated, and critically acclaimed debut album Death of a Salesman. Like their debut, World Class Prick was produced by Doug Henthorn, who is also known for his work with Healing Sixes, Joe Bonamassa, Jason Bonham and John Hiatt among others.

Over the past year The Easthills have shared the stage and performed on festivals with the likes of REO Speedwagon, Ian McLagan (The Faces), Meat Puppets, Fastball, Here Come the Mummies, Ted Leo and the Pharmacists, Black Owls, Big Head Todd and the Monsters, Georgia Satellites and more. Their upcoming 2014 concert schedule is in the works and already includes shows with Drivin’ N’ Cryin’ (4/17 in Indianapolis, IN), Tesla (5/20 in Indianapolis, IN), REO Speedwagon (6/27 in Normal, IL), Bunbury Music Festival feat. The Flaming Lips (7/13 in Cincinnati, OH), Weberfest feat. Cracker (8/2 in Kokomo, IN), Here Come the Mummies (8/8 in Fort Wayne, IN), and The Romantics (8/16 in Rushville, IN). More shows will continue to be added.