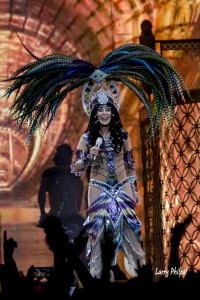 How did Cher become endearing? Cracking wise about being 68 years old, she winked broadly at us Friday night at Barclay Center, as part of her huge 47 date “Dressed To Kill” tour”. “This is my farewell farewell farewell tour… I said I was never coming back and never coming back and now I am never coming back.” It is both life affirming and a little sad and as the gay icon and crossdressers utility belt all in one  rolled up her humongous feather headdress and tottered and bounced on her highest of heels, while managing to, actually move about the stage. Still half naked, still able to get into her “Time Stood Still” wardrobe, still wearing pasties and yes, clearly,  she was indeed coming back.

During a 100 minute show,  Cher brought out the hits, a couple of misses, and, er, Sonny Bono on  film, to ride roughshod of boredom of any elk. Opening with two songs from her dreaded Closer To The Truth and one off Believe before heading for a costume change and the audience eas it up because Cher is a lively and entertaining and, yes, iconic presence. All three songs are barely there disco pop and blast, but the all singing Cher and all dancing dancersmade it it as much fun as it possibly could be, indeed it kinda sucked and still worked. I have seen so many concerts head South with three new songs to open, that wasn’t an option.

She fun’d  Katy Perry and Lady Gaga about staged extravaganza and waggled her butt as a reminder, but Cher is right: once she mentioned the obvious,  it is impossible to miss where the upstarts learned their moves and unlike Lady Gaga for one, Cher didn’t feel the need to spend the evening congratulating herself or her audience.

The show settles down for two duets with the late Sonny Bono, the political folk rocking “The Beat Goes On” and a “I’ve Got You Babe” that certainly shouldn’t have worked and certainly did work. Cher began her career with her ex husband and the couple, who had two successful TV variety shows, transformed a type of glam rock into wholesome family oriented pop music. Sonny, a small framed beatnik and Cher a “half bred”  raven haired hippie, changed themselves into the dysfunctional family of the 70s.

Cher with her husky voice and bigger than life outfits, became both a cross dressers dream and a gay icon. As did opening act Cyndi Lauper, who can’t shut up during her set, though it got less intrusive over the hour. For the penultimate song of her evening, Cyndi invited Rosie O’Donnell and “Liza Fucking Minnelli” on stage to join her for “Girls Just Wanna Have Fun”, Liza looked uncomfortable but willing . What Liza and Cher (and Cyndi for that matter) have in common is broad strokes that are easily broadened even further and manipulated. Yes, camp, but camp without the downgrading: to quote Liza, if they are gonna go they’re gonna go like Elsie. It is the widest of impersonators broadstrokes, Liza is eyeliner and arm gestures, Cher is head dresses and body paint.

Cher is campy as well but only so far and then she isn’t really campy at all. Cyndi mentioned that Cher has won Oscars, Grammys and Golden Globes and a filmed highlights of her movie career before two songs from her last movie “Burlesque”.  “Moonstruck”, “Mask”, “Silkworm” and more, is a reminder of how much more successful her acting career has been to… well, to all her peers. To all the Madonnas and Diana Ross’.  She is serious without being a self serving diva.

Musically, to complain about her steady diet of dance tracks over the past 20 years, shouldn’t miss that she brings hidden depth to material that doesn’t really have that much hidden depth. “If I Could Turn Back Time”  and “Believe”, towards the end of the evening, are a double shot of espresso and if neither of them are “Gypsies, Tramps And Thieves”, performed earlier with a traveling circus motif, Cher has enough personality to make them sound much more than they are. 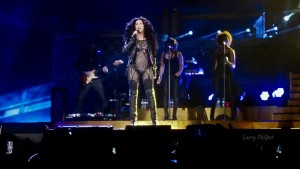 More interesting is a straightforward “Walking To Memphis” which gives Cher the opportunity to tribute Elvis Presley. She mentioned going to see Presley with her Mommy when she was a kid, and her Mommy and her standing on the seats and screaming their lungs out for him. That was her musical coming of age. “He was a rebel,” Cher tells us. “Elvis did things his own way”. So does Cher, to claim she is a little negligible as pop music is obvious, it doesn’t take away from her deep influence on present day pop divas. And to claim she is old is to use her shtick against her. “Can your Granny do this?” she asks and the answer is no, but neither can any one else. Watching the sexagenarian still looking, at least from my distance, the same, thrilling a sold out Barclay Center is to have to tip your hat and simply admire her for doing it and doing it and doing it.

This isn’t great art and only occasionally is it great pop but it is great something else: it is a great hope for all our futures, a true meeting plays for gays and straights, young and old, Cherokee and Anglo Saxon, to join in a world where, much more than Lady Gaga for whom there is always an undercurrent of persecuted minorities, we are one nation under an Arena. May the beat go on forever.