Pop Artist, Butcher Billy’s captivating view of The Donald and Hillary during the 2016 election cycle. 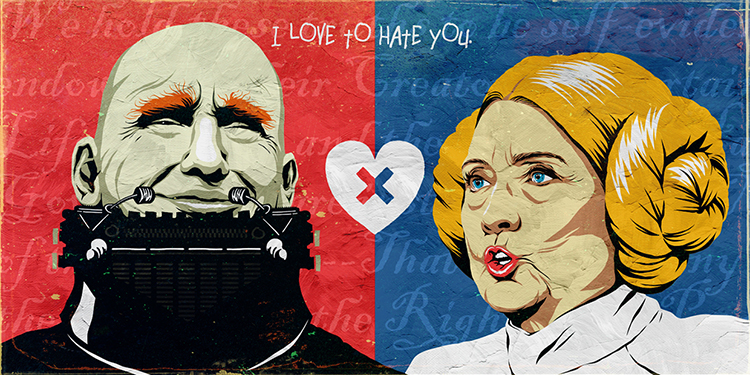 Butcher Billy, I Love to Hate You Series

The word ‘POP’ was first coined in 1954, by the British art critic Lawrence Alloway. Simply put, “Pop Art” is the art of popular culture. It is the visual art movement that illustrated the sense of optimism felt during the post war consumer boom of the 50’s and 60’s. This optimism has morphed into the pessimistic world that Brazilian artist, Butcher Billy, inhabits today.

Butcher Billy’s work is a slicing, cultural critique on capitalism, corporations, and cronyism. He is the artistic mastermind behind the visually arresting Pop Art that re-imagines music icons and politicians as superheroes, corporate clowns, and Star Wars characters. Butcher Billy’s images are often a mash-up of ideas, but the final executions are very cohesive and immediate, often using a comic book aesthetic and a strong color palette.

Pop Art emerged during WWII with advertisers like Coco-Cola using splashy color advertising to lure new consumers and push the war effort overseas. It became the leading player in marketing & advertising during the 1960’s. The superstar of the genre, Andy Warhol, created some of the world’s most widely recognized pieces of contemporary art and inspired a pop cultural revolution. Psychedelic rock posters and bouncy, bubble letters zoomed from your RCA while a groovy Adam West starring as Batman battled The Joker.

Butcher Billy was born in the late 70’s and grew up in the 80’s so his pop culture reference library is vast. He says in an article for lostateminor.com, 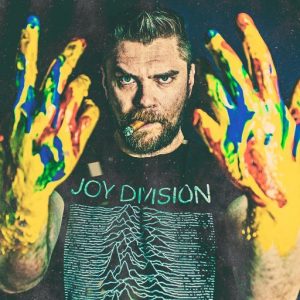 “I’m a living mashup of all the pop cultural references from these decades. I was practically raised by television and all that came plugged on it, like VCRs, videogames, geekiness, and alienation. I’ve always been a big fan of cinema, games, comics, music, tv and arts, but also an observer. I remember being just a little boy and reading music industry magazines – I didn’t even know the music but I was interested in the stories, the lifestyles and everything about that world. I guess I was always fascinated by cult icons – the way they can be larger than life, more than just normal people and become characters in people’s minds.”

In honor of tonight’s debate, we are sharing Billy Butcher’s “I Love to Hate You” series featuring, Hillary Clinton and The Donald. Regardless of your politics – these are striking images offering some comic relief during this seemingly never-ending CamPAIN season. POW!