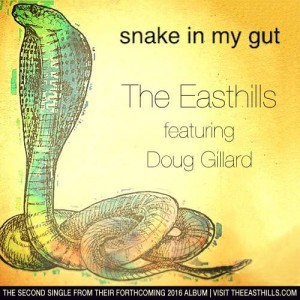 —————————————————————————-
(INDIANAPOLIS, IN – Dec. 15, 2015) The new, and second, single from Indiana-based rock band The Easthills is now available. “Snake In My Gut” (Caroline’s Heart) features a special guest appearance by renowned indie rock guitarist Doug Gillard. The song is available now for digital download through iTunes, Amazon, TheEasthills.com and CD Baby, and will be included on The Easthills’ forthcoming full-length sophomore album Fear and Temptation, due out in 2016.

“Snake In My Gut” (Caroline’s Heart) is released on the heels of the forthcoming album’s first released song “Mothers & Fools”, which was issued in November. Both songs include Gillard on guitar but represent two different spectrums of the band’s sound. “This song is very personal, but musically represents a combination of some of our biggest influences and ironically features one of them,” said The Easthills’ Will Barada.

Fear and Temptation follows the band’s critically acclaimed 2013 full-length debut album Death of a Salesman and the 2014 four-song EP World Class Prick. The new album promises another dose of indie-pop-rock-meets-classic-rock, special guests in addition to Gillard, and a new sense of urgency for a band ready for the next chapter. Additional singles will continue to be released digitally in the coming months prior to the album’s release. The full-length album will be available in both digital and CD formats upon release.

Gillard plays on six of the new album’s songs. A guitarist, songwriter and solo artist, he has played with artists including Guided By Voices, Nada Surf, Lifeguards, Death Of Samantha, Gem, Bambi Kino, Sally Crewe, Mascott and many more.

The Easthills recently wrapped a run of shows in November with Cheap Trick and the Reverend Peyton’s Big Damn Band and are currently working on a club tour of the Midwest in January and February 2016. The band will conclude the winter run of dates with a special show on Saturday, February 27 at White Rabbit Cabaret in Indianapolis. Tickets for that show are on sale now and available at: http://ticketf.ly/1OLgeYv

Since the inception of The Easthills they have played multiple Midwest shows with REO Speedwagon, Fastball, Georgia Satellites, The Reverend Peyton’s Big Damn Band and Here Come the Mummies while also serving as support for Cheap Trick, Tesla, Lynyrd Skynyrd, Ian McLagan (Faces) and Blues Traveler. The band has also appeared on several noteworthy music festivals playing alongside the likes of Flaming Lips, Weezer, Roky Erikson, Guided By Voices, Meat Puppets, Chris Robinson and many more.