OnStage has just received a copy of a lawsuit against  “69 Taps in Medina”, a Cleveland Bar, filed by Broadcast Music, Inc, known as BMI, which licenses music on behalf of musicians to ensure that musicians get paid.  While the band is not named in the lawsuit, it is believed that the band is Alter Ego, whose performance last August at 69 Taps in Medina prompted the suit, which could yield damages of up to $1.5 million. 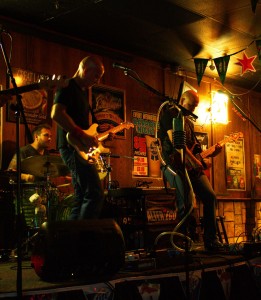 The suit lists Ten (10) songs that the band performed. There may have been more, but apparently BMI only has agreements with the license holders of these ten songs which BMI alleges were played in the single performance:

Note that the “license holders’ are not the same as the writers, so this suit may not benefit the musician at all.

READ THE FULL SONG LIST and who will actually benefit

The lawsuit alleges willful copyright infringement for each work, which could be up to $150,000 for each work infringed, plus costs and attorney fees.  It could even get worse, as there are more licensing agencies that could come out and pile on. There are ASCAP, and SESAC as well, as not all songwriters have signed on with BMI.

BMI’s heavy handed tactics are nothing new. In 2011, BMI filed another suit called BMI v. Cameron Hospitality, Inc, d/b/a Foster’s.  The Court ordered the restaurant owner to to pay BMI $30,450. for “illegally playing” four unlicensed songs. That restaurant has since closed.  In the Foster’s case, Broadcast Music Incorporated sued Fosters and claimed in court documents that it called the restaurant 56 times and mailed 29 letters. BMI says Fosters ignored its requests to get a license to play music.  However, reading through the files, BMI began sending communication regarding the restaurant’s lack of proper licensing back in September of 2009, but it wasn’t until May of 2010 – eight months later – that BMI even bothered to visit Fosters to verify that the business was actually playing unlicensed music. (From page 32 of the PDF.)

BMI is also asking for an injunction to prevent 69 Taps in Medina from playing more live music.

Taken to the extreme, if a bar or restaurant was playing CDs or music in the background, they may need not just a BMI license for the songwriter, but if the song was written by Bob Dylan (publishes with SESAC) but sung by someone from ASCAP, a BMI license wouldn’t help them.  So, what does a bar owner need to do if they want to have live music?  Any business owner that plays or allows for music to be played publicly, will need the proper music license in order to be compliant with the copyright law. But it doesn’t stop there. A photographer with music on her website would need a license. Which one? The easy answer is that it depends. For the bar owner, or even an owner of a skating rink, most likely you’ll need three (3) different licenses.  Three licenses for a simple website cost well over $800 per year at a bare minimum, and then there are additional fees depending on a confusing formula of website traffic, website revenue or music played.

Of course, artists should get paid, but will they really? Of the ten songs above, several of the beneficiaries of any damages from the lawsuit are not the songwriters, but are instead, record labels such as Universal. Whether the songwriter will ever see a dime is anyone’s guess.

There’s some speculation on whether this is just an intimidation tactic by BMI, especially when they’d brag about the Foster’s lawsuit victory on their website. Who really benefits and who suffers?  Local music will almost certainly suffer, given that bar owners choose to pay for licenses or risk being put out of business by example of one of the licensing bodies. If the costs to bring live music go up, will bands be paid less, or the costs of drinks rise to offset the rising costs? To read about the uneasy balance between the bar bands and the bar owners, check out https://musicnewsandviews.com/open-letter-from-a-bar-owner-to-musicians/

Lets us know what you think, below. We welcome your comments.