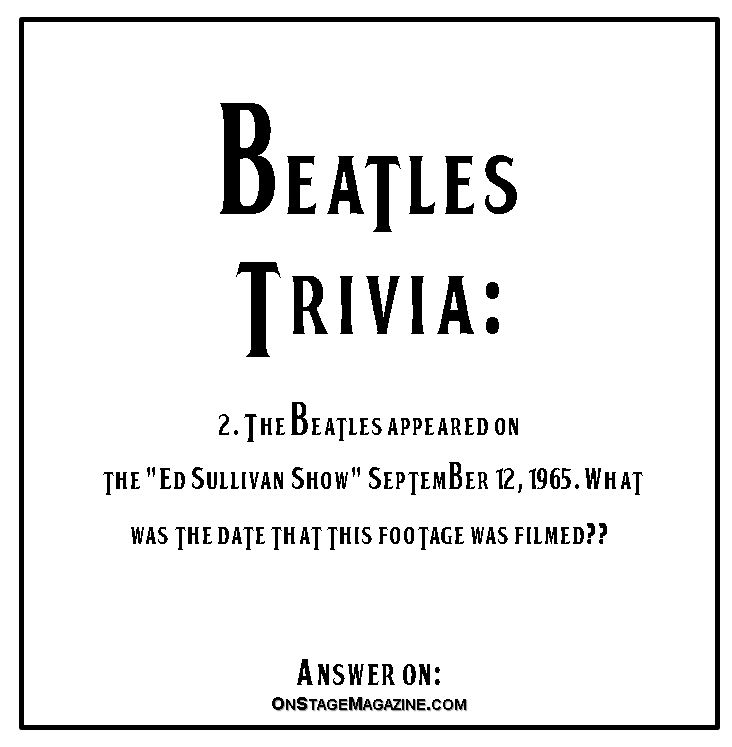 The Beatles appeared on the “Ed Sullivan Show” September 12, 1965. What was the date that this footage was filmed?

# Beatles Trivia — This footage was recorded live and marked the last live footage of The Beatles on the “Ed Sullivan Show”. They performed “I Feel Fine”, “I’m Down”, “Act Naturally”, “Ticket To Ride”, “Yesterday,” and “Help!”.

Sullivan’s program was known for its range of acts, including everyone from comedians like Joan Rivers to icons of musical theater like Julie Andrews to silly novelty acts. Sullivan also provided a platform for the emerging genre of rock ‘n’ roll, by hosting artists like Bill Haley & His Comets and Elvis Presley. Sullivan later hosted the U.S. TV debut of the Beatles on February 9, 1964, which was one of the most watched shows in TV history. Ed Sullivan Show biography.

The title track to The Beatles‘ 5th album and 2nd  film, Help! was written mostly by John Lennon at his home in Weybridge. Lennon spoke with David Sheff in the book, “All We Are Saying” and had this to say in 1980 on the album;

“When Help! came out, I was actually crying out for help. Most people think it’s just a fast rock ‘n’ roll song. I didn’t realize it at the time; I just wrote the song because I was commissioned to write it for the movie. But later, I knew I really was crying out for help. So it was my fat Elvis period. You see the movie: he – I – is very fat, very insecure, and he’s completely lost himself. And I am singing about when I was so much younger and all the rest, looking back at how easy it was.

I remember Maureen Cleave, a writer – the one who did the famous ‘We’re more popular than Jesus’ story in the Evening Standard – asked me, ‘Why don’t you ever write songs with more than one syllable?’ So in Help! there are two- or three-syllable words and I very proudly showed them to her and she still didn’t like them. I was insecure then, and things like that happened more than once. I never considered it before. So after that I put a few words with three syllables in, but she didn’t think much of them when I played it for her, anyway.”

We hope you learned something you didn’t know before you arrived.