American High – Bones in the Attic, Flowers in the Basement. Light, Dark, and maybe Weird.

American High is a rock band out of Sacramento, California and trying to define their sound is a little, well, weird. According to the band, “We think songs are more interesting when they can be seen in different ways. We prefer freeform songs. We tried to make each song completely unique. Weird chords with weird changes, weird blueprints, weird harmonies and backwards leads. Happy singers singing dark songs of love lost, the costs of constant war, and a scream into the night.”

While taking them at their word, the songs on their new album Bones in the Attic, Flowers in the Basement are not as weird as they are atypical. At times their sound is close to a 60s garage band, if that garage was offering a laid back California vibe. Other times the sound is more punk influenced with alt rock thrown in for good measure.

The music features a lot of harmonies, and some are prettier than others. The songs take ordinary subject matter and tell stories from different angles. American High also looks at the state of the world while they sing of the need for us globally to take a step back and breathe.

The tone of their songs is light and playful at times, while ominous at others.

“September” is a nice example of how it all falls together by making it slightly simple and slightly complex. On the other side of the scale, “Pretty Baby” and “Sister, Don’t Believe It” are more 60s influenced fun. Overall the sound of American High is a little Jayhawks, a little Tom Petty with a little Barenaked Ladies stirred in.

Jackson Pollack, William Faulkner and Jonas Salk are all referenced in “1.17.61,” a somber song that asks “If I don’t believe it, is it true?” This song and overall, the album’s writing has some thought put into it. Another example of that is “I Can’t Change,” where the psychological effects of war are explored. A lot of truth can be found in this song.

Bones in the Attic, Flowers in the Basement is an album of layers. There’s a lot to take in, not all of it apparent on the first or second listen. Will it be a blockbuster album? Probably not, but there’s a lot of effort and originality in it, and it’s worth a listen. Actually two or three. Take a listen now.

It seems like American High is so far choosing to remain slightly mysterious, listing the members by initials only. D.T.(rhythm guitar), E.S.(lead guitar), F.M. (Bass), T.M. (drums). Whether that decision has to do with keeping the focus on the music or being in the witness protection program has yet to be clarified. 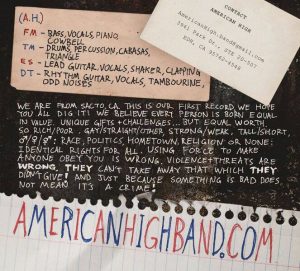