Album Review: Matt Schofield – Far As I Can See 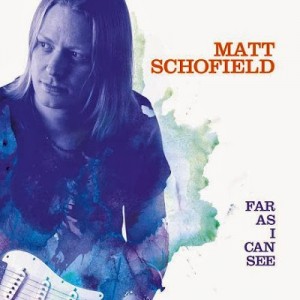 Album: Far As I Can See

These days, playing the blues is tough, and not just emotionally or financially. From a creative perspective, the blues in its current incarnation has been played a bit over 100 years. Many of the insightful musical ideas, chord progressions, and lyrical themes have been covered over this last century, which very well be the reason that there’s 10,000 different versions of the 12 bar blues in A. However, the recent lack of new ideas didn’t seem to intimidate Matt Schofield in the slightest bit, and in many ways the dearth of originality in blues music only serves to make Schofield’s most recent effort, Far As I Can See, all the more impressive. Throughout the album, Schofield manages to both create entirely new blues ideas and innovate on the works of his predecessors. To get a sense of what this means, I’ll be taking you through four of the standout tracks on Far As I Can See and discussing how these tunes reshape the mold and break out of blues tradition.

The first track to accomplish the lofty goal states above is the third on the album, “Clean Break”. Let’s get the obvious out of the way: yes, this song is in fact in 7/8, but Schofield and his backing band actually managed to yank a bumping groove from this difficult time signature. In fact, “Clean Break” might be the most impressive song on the entire album. Be on the lookout for some stellar guitar work around the 1:45 mark, and really try to pay attention to the bass lines and support during the solo. Not only does Schofield seem to have absolutely no problem soloing in 7/8, his drummer and bassist can both keep the groove and follow Schofield’s dynamics flawlessly. All in all, “Clean Break” is the purest example of the sheer levels of musicianship present throughout Far As I Can See.

I’d now like to introduce you to the 6th song on Far As I Can See, “Oakville Shuffle”. The style of this song is right in the name; it is quite literally a shuffle. There’s the ghosted snare notes that keep the drums from sliding too far into the pocket, there’s your stereotypical walking bass line, and (most entertainingly) some really impressive organ work. There’s the chaotic, improvised ending. Of course, Schofield pulls off one of his usual virtuosic guitar melodies. Unlike the other tracks on this album, “Oakville Shuffle” does not feature any vocals, removing any distractions from the music one might have. If you’re looking for an example of how Schofield manages to build on previous blues traditions, “Oakville Shuffle” is the song for you.

Towards the end of the album, the 9th song to be exact, is a little ditty by the name of “Yellow Moon”. Whereas the previous two tracks discussed in this review have shown Schofield’s ability to manipulate previous blues traditions for his own ends, “Yellow Moon” is an example of something entirely Schofield. Take a listen to the interplay between the bass line and keys. Both instruments use staccato lines to create a sharp, upbeat texture. Now pay attention to the relationship between the vocal melody and guitar countermelody. These too work together   to create a product that is larger than the sum of its parts. Then, both these pairs work together within the framework of the drum kit. Sprinkle in a little background vocals, and there you have it, one “Yellow Moon” of your own. Easy, right? In reality, it’s probably a lot more complex than it sounds, but the hallmark of any expert is the ability to make something rather difficult look elementary. “Yellow Moon” shows off Schofield’s keen ability of doing just that.

The album concludes with “Red Dragon”, a 9 minute doozy of a song that will likely be most fans favorite track from Far As I Can See. The song is heavily inspired by Jimi Hendrix and the rest of the 1960’s psychedelic blues movement. This can very obviously be heard in the fuzz heavy guitar lines and whimsical lyrical content, but even the simplistic drum and bass parts pay tribute to the likes of Mitch Mitchell. By far the most impressive section of “Red Dragon” is the solo section, with the organ solo being of particular note. There is no instrument that can soar like the rock organ, and “Red Dragon” is a great example of the unique abilities of this instrument. The song builds up into a chaotic yet entirely appropriate ending.

The key selling point of Far As I Can See is definitely the musical ability of its musicians; this seems like it should be an integral factor in any album, but the reality is that Matt Schofield’s most recent effort is a bit of anomaly these days. Schofield and company will be going on tour in March to support this album, so if you like what you hear, go ahead and see it live. Until then, this has been Jack Smith with On Stage Magazine, reporting on the best of music to our fantastic readers across the globe.