A Night With Tony Bennett Live In Indianapolis 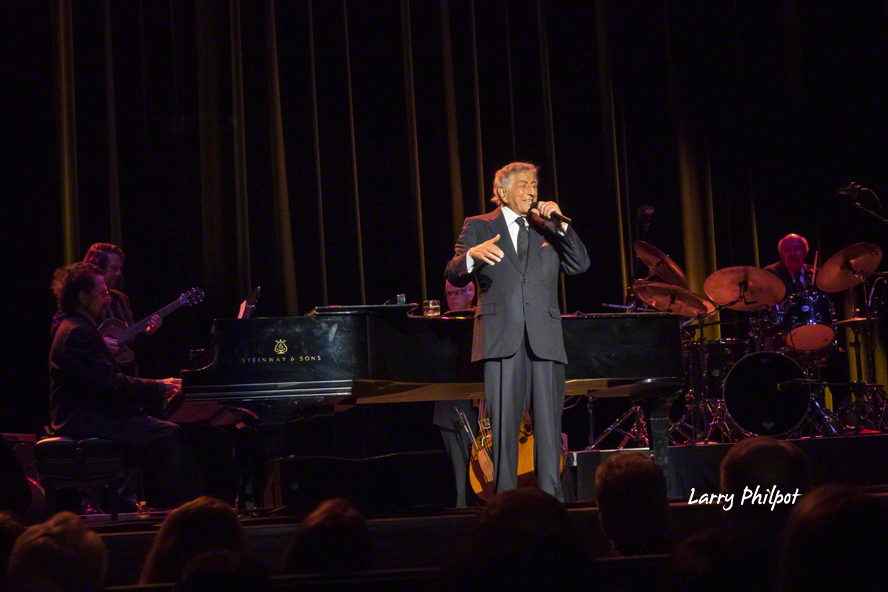 While competing with the March Madness of the NCAA Basketball Tournament and a highbrow fundraiser featuring Seth Meyers might have lowered attendance expectations for many performers, legendary crooner Tony Bennett had no such worries. His Saturday night sell-out of the Murat Theatre in Indianapolis gave testimony to the continuing relevance of a man who first began his career over sixty years ago. 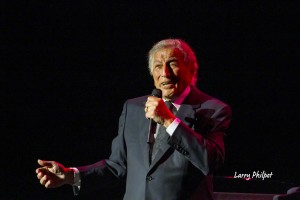 One legend introduced another as a recorded clip of the late Frank Sinatra brought Tony Bennett onstage. “Tony’s gonna come out now, and he’s gonna tear the seats out of this place, because he’s my man, this cat. The greatest singer in the world today, this man, Tony Bennett.” And really, who’s gonna argue with the Chairman of the Board?

Always charming onstage, the 89 year-old Bennett still has the moves of someone thirty years younger, which he exhibited throughout the night holding court for the diverse crowd. Made up of an age group ranging from teenagers to senior citizens, the audience rewarded Mr. Bennett with standing ovations after nearly every song. 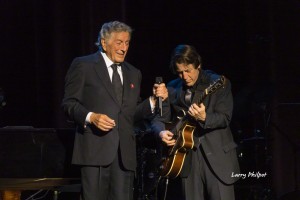 The continuing validity of Tony Bennett

You can say that teaming up with such contemporary artists as Elton John, Sting, k.d.lang, and Amy Winehouse on his Duets albums has brought him new fans, but what’s interesting about Bennett’s long career is that he’s never changed his musical focus; he’s only opened it up to younger generations. The standards that he covers are classics for a reason, and allowing the best and brightest in today’s music to interpret them has greatly broadened his appeal, while shining a light on a lot of brilliantly composed music. An example to his wide appeal came from one woman in attendance who stated that because of his soothing voice, Tony Bennett was a listening favorite of hers and her twenty-five year-old daughter during long road trips.

Referencing Cheek to Cheek, his latest million+ selling album performed with Lady Gaga, Bennett urged the audience to buy it because “she really, really needs the money.” You could almost see the twinkle in his eye as he said it. It can also be said that Lady Gaga’s career has taken a different and maturing path since her Grammy Award winning collaboration with the musical icon. 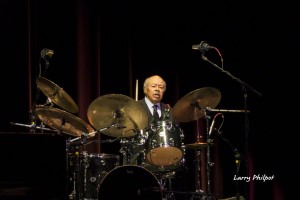 The power of the players

Throughout the show, Bennett acknowledged each of his band members, showcasing their work and in a humble way intimating that with musicians of this high caliber, his job was made much easier. Since the passing of Bennett’s long-time piano player Ralph Sharon, Lee Musiker now fills those very large shoes. Musiker, who once played with Buddy Rich, seemed to, especially on “One For My Baby And One For The Road,” be having as much fun as the audience. First class musicians in their own right, guitarist Gray Sargent, bass player Marshall Wood, and former Count Basie drummer Harold Jones, completed Bennett’s musical accompaniment. 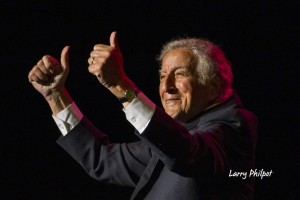 After nearly ninety minutes of having an intimate connection with, and repeated standing ovations from the crowd, Mr. Bennett finished his set, then shook hands with nearly every person in the front row. Tony Bennett, still unstoppable and still a class act for the ages.

Complete photo gallery from the show