The cloudy skies and little bits of spitting rain on the windshield caused me to have second thoughts of my plans for the night.  I don’t like getting wet, and even though my camera gear is waterproof, I don’t like it getting wet either. Plus, an outside venue in the rain usually means a sea of umbrellas and no view of the stage.  I was in downtown Indy for the 3 Doors Down and Daughtry concert, with special guests Oleander. 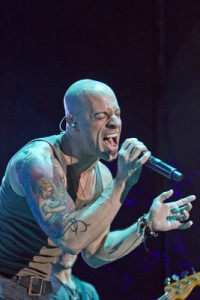 I left home with time to spare, but a baseball game across the street from The Lawn at White River brought traffic to a crawl, so I arrived just toward the end of Oleander’s set to hear their biggest hit, “It’s the Reason” (why I’m here).  I saw the rain was going to hold off, so I grabbed a beer and unpacked my cameras while the stage was being set up for 3 Doors Down. I love photographing and attending concerts at this venue, but the parking is just horrendous. Many people park at the Zoo, including me, and walk about 3 blocks or so. In the past, zoo members flashed their membership card and didn’t have to pay to park. Now, a zoo membership for parking is nearly useless because they now ding you for $6 — almost a beer. Getting to the venue and getting gouged for parking blocks away were fortunately the only negative of the night. 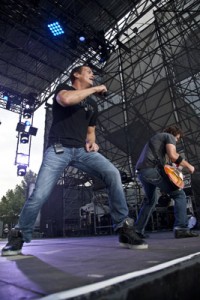 I had  great seats in the center, but for the first 3 songs of each set, I was up close and personal in the photo pit.  I am not sure of the order of the songs, but 3 doors down opened with a very energetic start that just continued to build.  I found myself jumping to “It’s not my Time”, while focusing on lead singer Brad Arnold, who was wearing a US MADE green Tshirt and dogtags.  There were about 12 or 13 songs total, including two of my favorites, “Here Without You” and “Loser”.  Most impressive was Arnold leaving the front of the stage to man a second drum kit. He and Greg Upchurch delivered a tight, two-man syncronized jam that almost seemed like a split screen image of the same drummer.  Very, very sweet. 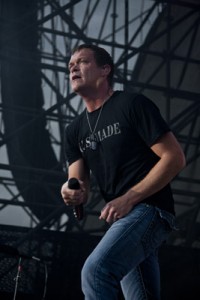 When they launched into “Kryptonite”, the crowd went wild as Chris Daughtry walked out to join in on that song.   Arnold and company closed in their traditional fashion — dedicating “When I’m Gone” to the members of the military and their families.
After a set up change, Fifth season “American Idol” non winner/big winner Chris Daughtry took the stage for another high energy session to a roaring crowd.  He performed a variety of ballads and rocking pieces which highlighted his versatility, and did a solo cover of Chris Isaak’s “Wicked Game”, which he said was specifically for this Indianapolis audience.

Rallying the crowd with a good cover of Phil Collins’ “In the Air Tonight,” Chris Daughtry was joined onstage by 3 Doors Down lead singer Brad Arnold in a surprise appearance.  Nearing the end, and competing with fireworks from the baseball stadium across the street,  Daughtry urged people to get out their lighters or cellphones or glow sticks and hold them in the air as he went into his breakthrough, “I’m Coming Home,” which Daughtry has always maintained was the sole reason he ever got a record deal.  Super sweet concert! 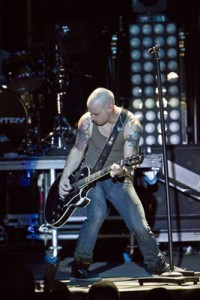