2 Weeks away: One Direction in Indy 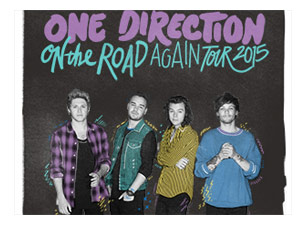 ONE DIRECTION “ON THE ROAD AGAIN” TOUR

HONDA CIVIC TOUR will present the upcoming ONE DIRECTION ON THE ROAD AGAIN trek across the U.S., bringing the world’s #1 touring band to Indianapolis.

With a staggering 94 number ones and over 46 million records sold, in just four short years, One Direction have gone from energetic pop upstarts to international superstars. As the band’s songwriting becomes more personal with each record, FOUR is their most stunning album yet. The album follows the global success of their sold out WHERE WE ARE stadium tour and the 3D film documentary THIS IS US. Fans also had the opportunity to relive the 2014 summer tour with the release of their second film WHERE WE ARE: THE CONCERT FILM, which broke records as the biggest ever Event Cinema audience across one weekend. Add all this to their 3 billion YouTube views, 109 million combined Twitter followers and 33 million Facebook fans and One Direction is more than a worldwide phenomenon.

On Sale Now and can be purchased on Ticketmaster.com and LiveNation.com.